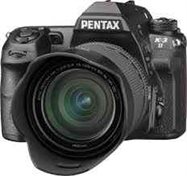 Pentax k-3II ($1099.95) is an intriguing update to the k-3.Its body shape is unchanged,having 24 megapixel APS-C image sensor omit OLPF and auto-focus system.But the built-in flash is gone,replaced by a GPS and an innovative Pixel Shift Resolution mode has been added.

Still, there are distinct areas for improvement from the original k-3 that has been ignored, as for the memory dual SD slots as having been added. For improved details, pixel shift resolution shouting mode is available as well as OLPF simulation mode. It also has a sharp rear LCD. But the video quality is well behind the times. The astrotracer function is amiss, burst rate slow when tracking focus is enabled.

Whereas a Pentax shooter was mulling an upgrade, it’s worth considering, mainly since it’s sold for significantly less than its retail price. As per the editors, the choice for pro-grade APS-C cameras is still the canon EOS 7Dmark II, which has an auto-focus system that’s on an entirely different level than the competition.
But the 7D carries a hefty premium in price and won’t do you much good if you’ve invested in Pentax lenses. The Pentax k-3II D-SLR adds some features to its predecessor, it including a GPS but does so at the cost of the built-in flash.