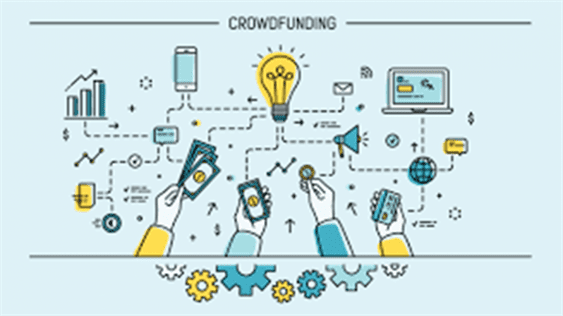 Crowdfunding – Yes! It is exactly what the words mean i.e. the crowd acts as a source of funds for YOUR business. This concept is still unknown to the majority of people in our country but it is popular in other countries.  There are more than 600 platforms for crowdfunding worldwide but we haven’t heard of this concept in Nepal.

What is crowdfunding? How is it done?

Crowdfunding is a process in which you put your idea out to the public and if they are convinced with it, they pitch in and give you a helping hand. There are lots of sites that provide us the platform to connect with the sponsors. Keep in mind that this would be quite difficult without the help of our friend- the internet. Let me give an example of this popular site called gofundme.com. I could only go halfway through it because I don’t have an International Bank Account. But I did get the concept. So for all the people out there who do have an account or have a relative there, this could be pretty helpful.

So basically what we do there is first of all create an account as we would do on any other site. We fill in our personal details and our account. Then we convey our idea there. We set our financial goals; for example, our goal is $10,000. Now the sponsors see our idea and if they feel like they can be benefited from it, they will help us by making small donations – $5, $10, etc. It will be easier to get $100 from 100 people than $5000 from 2 people. If our goal is reached we can refund the money.

Most of the crowdfunding is done for philanthropy and in that case, no reward is expected by the donor. The people making the donations for business projects do expect some reward or revenue. Loaners expect revenue and donors expect rewards for example sample of the product for a product-based idea. However, the people who help us do not become the co-owners of the business, but they do feel like they had a small part in helping it initiate. This is also a good way to market the product.

Sites such as Kickstarter, PleaseFund.Us, CrowdCube, and WeFund are some popular sites.

“Crowdfunding gives you—the project owner—the ability to raise large amounts of money for your idea (sometimes through presales of a product, sometimes something as simple as sharing in the creative experience), receive feedback from the market all the way through your fundraising campaign and start your project in the knowledge that you already have the money at the bank and some customers that have bought into what you are creating,” says James Bailey, founder of PleaseFund.Us.

Crowdfundnepal.com is a crowdfunding platform in Nepal.

Thus if the crowdfunding concept is implemented in Nepal, it could help a number of entrepreneurs and social organizations. We will have a role in making someone else’s dream come true.