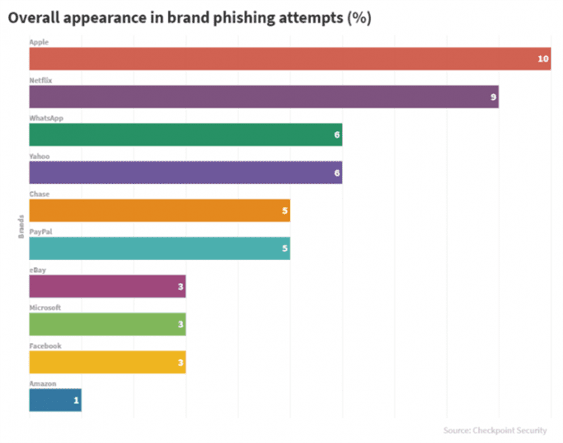 Apple has always been a leading technology market. In the history of nearly 45 years, the company has gained a lot of good reputation and bad ones. A recent one being that the company brand is being used for phishing attacks. As per the Brand Phishing report by Check Point Research, the brand emerged as the most-imitated brand for phishing.

According to the report, the brand was on the seventh spot last year, but the number jumped within this year’s first four months, making it at number one. The report indicates the sudden rise in branch name in phishing after the launch of the Apple Watch and included “criminals exploiting the online buzz to launch several credential theft attempts.”

Phishing is known as tricking people by making them give their identity, confidential details, and use their features. Their details can be further used to steal money from them. Brand phishing is quite similar to other phishing attacks. Here attackers imitate the official website of a famous brand by creating a same domain name or URL of the original site. These links are then sent to targeted individuals via email or SMS to get their sensitive information.

Apple was also mostly used in a web-based phishing scam.

Is Apple only one being used for brand phishing?

Not just technology but banks and media can also be used for brand phishing attacks. After Apple, there are different platforms like Netflix, Yahoo, Whatsapp, Facebook, etc. used by attackers for brand phishing. According to the report, Apple tops the chart with 10% of brand phishing attempts globally. About 9% of the total were using Netflix and 6% using Yahoo.

The research indicated that web phishing was reported as the most common attack. About 59% of phishing attempts in Q1 of 2020 are using web phishing. After web phishing, mobile phishing is second, with 23% of attempts. Email phishing comes in third with 18% of attempts.  The report also states that this surge has been the result of the increase in the usage of smartphones. After the lockdown implementation in most of the countries, people are busy using their smartphone and browsing over the internet. This has become an excellent time for phishing attackers to get their victim details. During this time, we should be aware of phishing attempts and be cautious about personal data theft.