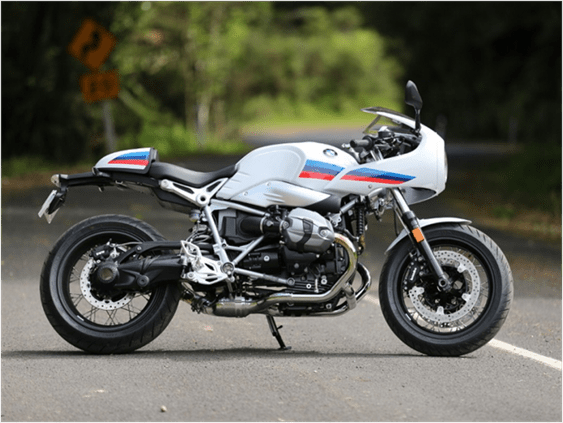 The BMW R nineT Racer is a cafe racer from the R nineT family which is explicitly made for adventurous riders with its low clip-on handlebars, covered pillion seat,s and fairings. The classic looks of the BMW R nineT racer are inspired from the ’60s and 70’s when motorbikes were known to be a rebel’s domain. Despite the classic look the customizable modern mechanical parts however make it strikingly different from the everyday retro bikes; a perfect rebel for the changing times, loaded with a bit of past and the future.

The style of the BMW R nineT Racer is a reminiscence of the ’60s and ’70s with a tad bit of racing essence. The half-shell fairing, the shape of the seat, the distinctive head give off a retro vibe. On the other hand, the elongated body, low handlebars. High seat. Far back footrests promise a sporty experience like no other; the rider has to lie on the bike because of the foot rests!

As for the color options BMW offers light white and 719 black storms metallic/Aurum to its customers. The light white pain brings out the sporty side and the aurum brings out an elegant combination of black and gold.

The phrase “Looks can be quite deceiving” is perfect to describe this bike as it packs quite a punch under the hood! The bike houses air cooled 1,170 cc twin-cylinder boxer engine. It produces a power of 110 bhp at 7,750 rpm and a maximum torque of 119N.m at 6,000 rpm which is more than sufficient to give you the thrill of rapid riding whilst also making it effortlessly fun. The boxer engine is specifically designed to deliver god power at low speeds. When combined with the half shell fairing and a relatively low riding position, the R nine T offers continuous high speeds too.  Also combined with a 2 in 1 exhaust, BMW promises more torque and a smoother idle than the previous version. The R nine T racer stirs the hearts that desire the rush of adrenalin.

The geometry of the R nine T racer leans towards a sportier side which makes the rider lean on the petrol tank. This provides a fun riding experience at higher speeds, but the issue comes at the slower speeds. The narrow clip-on and the aggressive riding position contribute to making the racer less agile at lower speeds. So, the higher the speeds that you run at, the better the feel of the bike. Other than that the suspension leans slightly towards the softer side, which can be adjusted as per the need of the rider. And the bike also comes with dual ABS and ASC, which is not much considering the amount features provided by modern motorcycles. With the ABS and ASC, you will have a better braking experience and won’t have to worry about your rear tire spinning on slippery roads.

BMW Motorrad will also provide customized add-ons, not limiting your choice and imagination to their product line, that is if you have deep enough pockets.