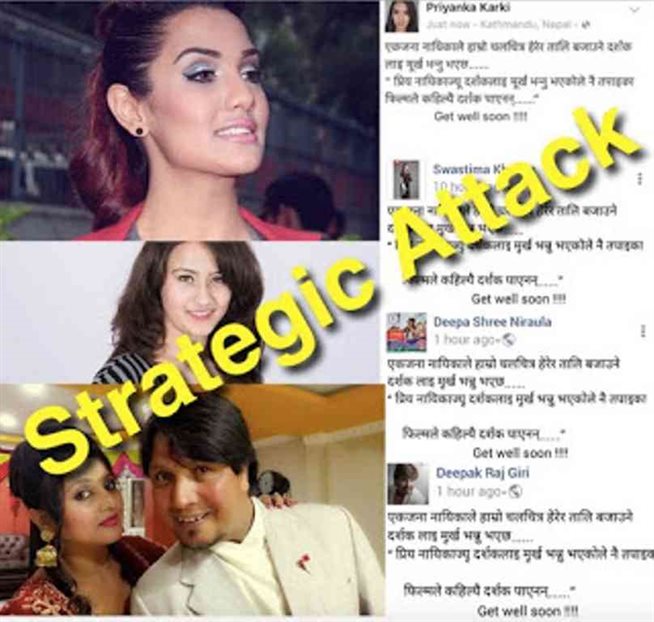 During the  Ekadeshma International Short Film Festival 2017, a panel discussion on ‘Women in Films’ took place at QFX Kumari. The session was Moderated by Saguna Shah, with women actors like  Manisha Koirala, Reecha Sharma, Ramyata Limbu, Sampada Malla and Menuka Rai as the speakers.

Richa Sharma expressed her version of the movie “chhaka panja” where she talked about the portrayal of women in Nepali films. She shared her experience of watching Chhakka Panja with the audience and how people enjoyed scenes and dialogues that were really not gendered friendly. She and some of her friends with whom she was watching felt absurd about the whole movie as it was the debut movie of the  Deepashree Nirula a female director and how could she have made such a movie that had such dialogues.

She said ” we the Nepali audiences are Hippocrates
and we enjoy such acts where we prefer to say we give respect to women on the same hand we disgrace women image with such dialogues and enjoy it .”   In return to the statement Deepak Raj Giri, Deepa Shree Niraula, Priyanka Karki, Swastima Khadka and the whole team of Chhaka Panja retaliated and shared a status telling that the actress is sick and with the message of “get well soon”.

Looking at the situation, it is a clear case of Cyber-bullying and how people are unknowingly doing it. We may or may not be able to search for a legal definition in our law but according to international practice, it is for sure illegal. Actress Rekha Thapa stood up for Richa Sharma and said Deepa and Deepak couldn’t rise above the ‘Joker’ status.