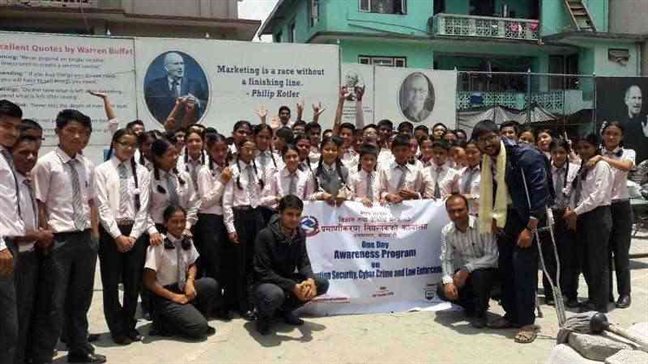 The program started with Prabesh Koirala ’s presentations on Cyber Security. He gave a brief description of the frequent attacks in Social Media and some knowledge about the malware along with the explanation of how it works and slowly starts destroying our computer.  He described a few preventive measures for us to be safe from getting the victim of being a Mobile Security. Mr. Satish Subedi recommended on maintaining security firewalls in our email. He described the methods for managing our data secure as well.

The next session of the program included a message from the CSIT Head of Texas College Mr. Shankar Sharma. Sharma started his talk with a small story about  Sister of Bimal Gharti Magar’s case. And he also mentioned a website working on cybersecurity, which was started by his friend. His other talks included the “dos and don’ts in the social media.” He explained how crucial the role our social media profile plays in our life. He said that it gives a brief mentality about the person. They post on their Facebook profiles. His words were worth hearing. He bid everyone goodbye and went right after his speech as he had a shooting going on. He handed over the microphone as well as the stage to Mr. Chiranjibi Adhikari after he was done.

The last session by Mr. Satish Subedi was fascinating. He started with short poetry (Nepali) relating to the cybersecurity and gave a head start to his presentation with a short story about a woman being robbed by the cybercriminals. He explained the scenario and warned that not only her but each one of us could have been the victim if the secure methods were not followed and the program was officially ended with the group photographs taken after the interaction session.

Surface Pro By Updating To The Latest Version Of Windows RT...