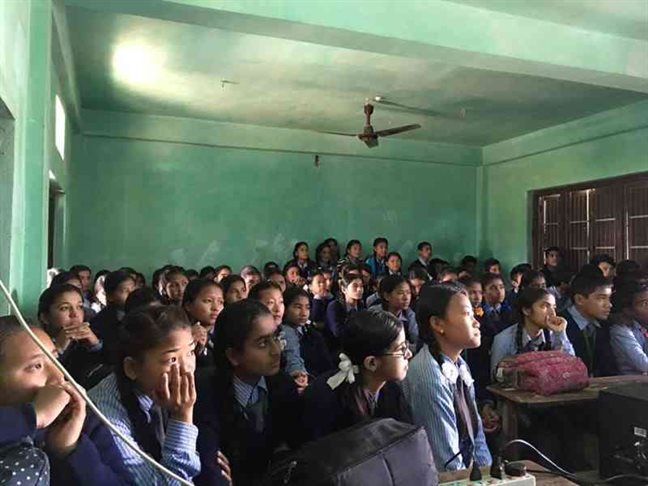 Chitwan,  Cyber Security International at Bhimnagar Higher Secondary School, Gunjanagar Chitwan. The program has been sponsored by Madan Subedi who is recently live and study in Australia originally from Gunjanagar. He is one of the kind hearted person who has always been there for supporting and helping the people of the nation. Mr. Sudan also helped earthquake victims in Nepal. He has proved by contributing and supporting in various social works and helped financially in various fields and organization of Nepal . As he is always there for the betterment and upliftment of the nation.

Firstly, the concept of Cyber Security Awareness in Nepal has been conceptualized by Prof. Dr. Ramhari Subedi who lives in Washington DC and also he is the founder president of DCNEPAL DOT COM and the first appointed Cyber Security Advisor of Central Department of Nepal Police. The organization has been launching its awareness campaign nationwide as well as it has been conducting the program internationally. The program has been conducted in USA, Canada, Sudan and various parts in Nepal such as: Kathmandu, Jhapa, Chitwan and Tanahau.

The CSI’s awareness generating program; basic level training program has been conducted at Bhimnagar Higher Secondary School, Chitwan and at the beginning of the program sponsor Subedi’s video was played and his father briefed about his background on social contribution.

The program was handled by the coordinator Pooja Gurung, trainer Nirma Jamarkatel, and Paras Poudel both first and second phase presentation including the slide show about cyber crime, creating user account , gmail setting, facebook setting, find myphone, wifi setting, file locker etc. Ultimately, the trainees have given the positive feedback after the end of the program and they told they were benefitted and said that they were aware about all those securities and crimes.