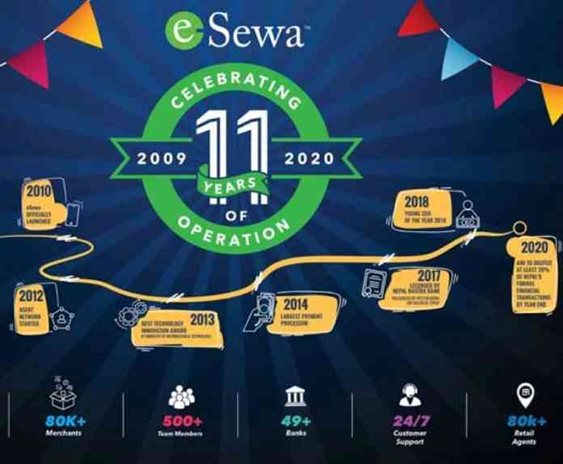 Esewa, which began its service in 2001, with the release of the beta version on January 25, has reached every part of the country in a decade. The service that allows money to be paid through mobile and internet has contributed greatly to the government’s campaign to build a cashless economy by reaching every municipality, village, and ward of Nepal.

Over a decade, the number of direct account openings in Esewa has grown to 30,00,000. Similarly, indirectly, about one million people are receiving services through Esewa. Currently, there are about 80,000 agents (Esewa zones and points) across the country. So far, the number of users downloading sea mobile app has reached nearly 20,00,000.

“It has been a very exciting decade for us,” said Subhas Sapkota, chief executive officer of Esewa. “We have been successful in making our mobile phones more business-oriented than limiting them to phone calls. In the coming days, we will be adding various services that will make the lives of the common people easier.”

Esewa has brought many kinds of comfort to remote areas as well as Nepal’s affluent areas. The company plans to move ahead and expand its services to reach every Nepali in the coming days.

With a platform like Esewa gaining so much popularity in a decade of its establishment, it’s a good sign for the days to come.