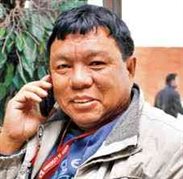 The government has requested famous artist and reknown individuals to aware people about the transparency of the fund that’s being raised in the PM natural disaster relief fund. Even though the fund is in the name of PM, he is not able to use the fund as he likes and the process of transparency of the fund was explained to famous artists, players and social worker by the deputy chief of The National planning commission of Nepal, Dr. Govindaraj Joshi.

“We have taken their help so that we could change the wrong concept of people about the relief fund” said Joshi to the media and added “They are going to inform people about the transparency of the fund no matter from where the fund is being raised for PM relief fund” Deputy chief of the commision Dr. Pokhrel has summoned various artist and renowned person like Madan Krishna Shrestha, Harisbangsa Acharya, Magsaysay award winner Mahabir Pun, cricket team captain Paras Khadka, Eye specialist Dr. Sudan Ruit and Actor Rajesh Hamla for helping them. Pokharel also said that they were informed about the transparency of the Fund with every money spent by the Government.

The money when spent is made only with discussion and authorization from 8 different ministries. Deputy Pokhrel also stated that collecting fund for relief is the duty of everyone, so they have asked help from them for this kind of work. There were many questions raised on the issue of transparency when the government asked everyone to collect for the relief fund.

The transparency of this fund is better than any organizational and personal funding; therefore these renowned people were asked to aware and removed the wrong concept of people about the fund. “The reason we were asked to aware people was due to the lack of knowledge, citizens have about the fund,” said Madan Krishna Shrestha and also added “Country is not stronger without Government being strong. So we should inform people about this. After this illusion is removed from people, more and more money will start to collect in the fund. Everyone is here to help the victimized brothers and sisters.