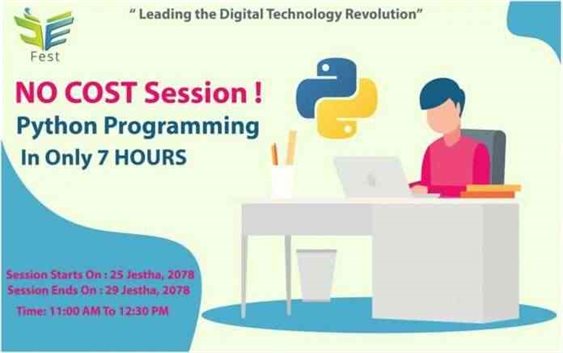 Future Education of Science and Technology is a software company in Kathmandu, Nepal.

Python was created by Guido van Rossum and first released on February 20, 1991. Python is generally a coding language which means that, unlike HTML, CSS, and javascript.

Python is an interpreted object-oriented .as well as a high-level programming language which have dynamic semantics.

High-level built data structure and combined with dynamic typing and dynamic binding, which makes it more attractive for rapid application development. It is also used for scripting or glue language to connect existing components.

Easy to learn simple, which reduces the cost of problem maintenance. Python supports modules and packages that extensive standard library are available in source or binary form without charge for all major platforms that can be freely distributed.

Easy to Read, Learn and Write. Python is a high-level programming language that has an English-like syntax.

This language is one of the most accessible programming languages available because it has simplified syntax and is not complicated also easy to use. That gives more emphasis on natural language. Because of ease of learning and usage, python codes can be easily written and executed much faster than other programming languages.

Future Education of Science and Technology (fest) will run free Python programming to make good use of the ban on corona epidemics. Fest Company had earlier also conducted various courses online for free.

It has been informed that the free class will be conducted for 7 hours at the rate of 90 minutes daily from 25th June to 29th June.

Free online classes will discuss Python programming opportunities and careers. Made from Python Information about various projects will also be given. In the free classroom, training will be conducted focusing on various topics such as Python’s fundamentals, framework, scope, and approach.

Preference will be given to those who register early for the Python session, the company said. The session will run from 11 a.m. to 12.30 p.m.

Fest has already taught the free alphabet to the public on the Google Play Store and hundreds of programming languages ​​in Lockdown. Fest is working in the field of education in particular.

It is also involved in software webpage designing database designing, creating a variety of applications, and IT-related work consulting and internships, and job creation.

Fest Company has been working directly and indirectly in science and technology for the last seven years in governmental and non-governmental organizations.

If you want to learn Python programming for free, click here to fill out the form and secure your seat. Click Here