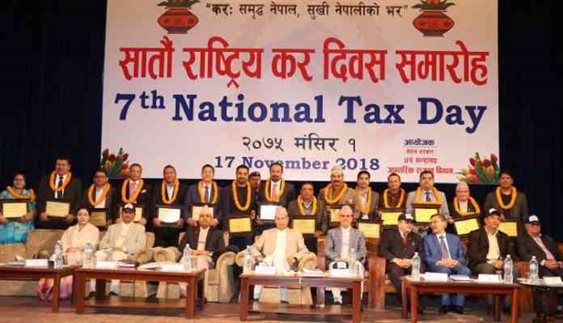 Marking the occasion of 7th national Tax day, Government honored the highest tax paying organizations. With a motive to encourage such taxpayers, Government awarded the best taxpayers in 15 various categories. Among them, F1 Soft international, the parent company of eSewa bagged the award of the highest taxpayer in the Information technology (IT) sector.

Multinational Company Surya Nepal Pvt. Ltd became the highest taxpayer among all the sectors. Dabur Nepal became the best taxpayer in the export category. Likewise, Himal Power Company turns out to be the most top taxpayer for the production industry.

Siddhartha Sumsher J.B.R became the highest tax payer person for the category of individual taxpayer.  The names of other sector’s most top taxpayers are mentioned below:

Locus 2020: Technology For Sustainability To Start From January 31st

Calls To Different Networks Will Decrease From Chaitra, NTA