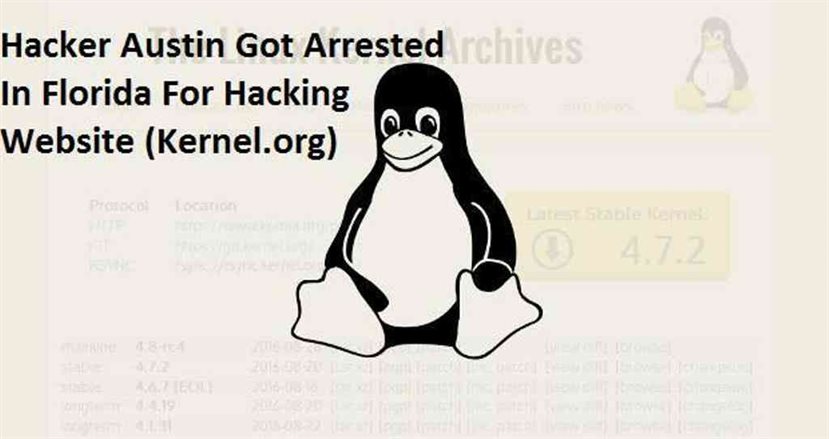 That’s good but feels somehow wrong as well since Donald Ryan Austin, just a 27-year-old programmer from EI Portal, Florida was charged Thursday with hacking servers of the Linux Kernel Organization (kernel.org) and the Linux Foundation in 2011.

The Linux Kernel Organization (Kernel.org) serves for distributing the Linux Operating System Kernel, which is the heart of the OS, whereas The Linux Foundation is a separate group which supports Kernel.org. I guess now you know how essential and confidential system, he was going to leak. For this reason, he was arrested. And this security breach forced the Linux Foundation to shut down Kernel.org completely and rebuild several of its servers.

Due to his bad luck, Miami Shores Police stopped Austin while breaking traffic rules on August 28 and then he was arrested after identifies as a suspect in 2011 case. For this reason, he was charged with four counts of “intentional transmission causing damage to a protected computer,” and finally he was released from jail on a bound of $50,000 provided by the family of his girlfriend.

Besides, Judge had also ordered Austin to stay away from the internet, computers and even every type of social media or e-mail services. Furthermore, he was also scheduled to appear in San Francisco Federal Court on September 21 before the Honorable Sallie Kim, and even he was found guilty, he would face a possible sentence of 40 years in Prison with $2 Million in Fines.

Now let’s know what the activities he had done before are:

Austin had also managed to steal login credentials of one of the Linux Kernel Organization System administrators in 2011 and used them to install a hard-to-detect malware backdoor, dubbed Phalanx, on servers related to an organization. Using Phalanx malware, Austin allegedly installed Ebury, a Trojan designed for Linux, FreeBSD or Solaris Hacking- on some servers run by the Linux groups and they helped him to gain access to the login credentials of people using the servers.

Not only this, He allegedly infected Linux Servers like “Odin1”, “Zeus 1”, and “Pub3”, which were released by Kernel.org. He had even hacked the personal email server of Linux Kernel Organization’s founder Peter Anvin.