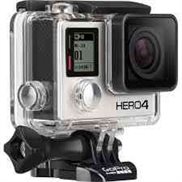 The HERO 4 Session is the smallest and lightest Go-pro ever invented. It is 50% smaller and 40% lighter than HERO 4 cameras and is the most wearable and mountable Go Pro ever. It has got the sleek and versatile design that could be used anywhere at anytime.
It has got the most comfortable one button control that a single press of the shutter buttons turns on the camera and automatically starts shooting video or time-lapse photos while a second press stops recording and turns off the camera automatically.
It is pretty much simple to use. HERO 4 Session is the waterproof and rugged camera that is water resistant up to 10 m without different housing. It comes up with specially designed accessories and mounts that are compatible with any other Go Pro gear that gives the best mounting features.
The low profile frame gives the lowest profile of any Go Pro camera and the standard camera mounts to generate a wide array of ultra-compact gear setups whereas the Ball Joint Buckle provides the freedom to modify things without the procedure of stopping and mounting the camera.
The Auto Image Rotation adjusts the capture orientation to right-side up automatically when the camera is mounted upside down, and there is no need to flip the footage in post-production. It is compatible with any mounts bikes, motorcycles, boards and so on.
HERO 4 Session maximizes the battery life by only ousting power when the camera is recording when not recording it automatically powers off. One can capture a full day of video and photos or record up to 2 hours continuously.
The battery can be charged via USB directly from the laptop or via the Go Pro Auto or Wall Charger. HERO 4 Session captures high resolution 1440 p @30 fps and 1080 p @60 fps videos that is sharp and lifelike. One can capture 8 MP single photos, Time Lapse photos at set intervals from 0.5 to 60 seconds and Burst photos @10 fps; it gives a very versatile range of PHP to capture modes.
It has got dual mic one in the front and another in back. The inbuilt Pro tune app unlocks the full cameras potential and delivers the least compressed cinema-caliber video quality optimized for professional productions. It only costs $199.99 which is quite less expensive.