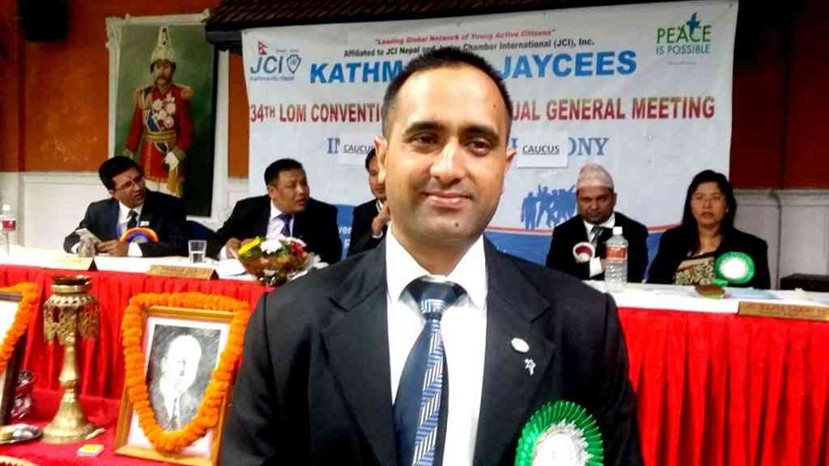 The program for this conference was well organized and systematically arranged to meet the objective of Kathmandu Jaycees “Leading Global Network of Young Active Citizens”. Dr. Chiranjibi Nepal Governor, Nepal Rastra Bank, is a chief guest of today’s program and has given his valuable speech on “how to promote Nepal by utilizing the available resources”, Obviously it’s great thing to have such type of mentality on ourselves as well so JCI Kathmandu, Nepal, from the very beginning of its establishment in 1970, a leading Chapter, affiliated to JCI Nepal and Junior Chamber International (JCI), Inc, play a significant role to develop leadership qualities among youth and make them self-dependent for the sake of Personal development and National development.

For this purpose, still, now it is working on the same ideology for Individual development, Leadership development, Business leadership, and International leadership.

Realizing the importance of JCI (Junior Chamber International) and its objectives, on 19th November 2016, a program by Kathmandu Jaycees was scheduled as:

Inauguration: By Chief Guest, Dr. Chiranjibi (By Lightening the Panas)

The vote of Thanks: EVP JC Sudip Kumar Baniya

During this conference, chief guest, Dr. Chiranjibi Nepal Governor, Nepal Rastra Bank proudly told that our country, Nepal is full of natural resources and we have lots of potentials to speed up our national development activities, so he requested all to work together for the sake of personal development and national development. He further added that around 68% of cultivable lands are bared although most of the people depend on agriculture to sustain their livelihood similarly most of the bank, financial institution are established in every nook and corner of Nepal but due to lack of awareness, people still not utilizing the cheaper loan provided by Bank and other financial institution for their own benefit.

Similarly, the brain drain problem has become the great issues, not let to promote our country. Finally, he announced that until and unless, everyone did not utilize their own capabilities, national development would not be possible, so being a chief guest at Kathmandu Jaycees program, he shared his expression of happiness to be a part of Kathmandu Jaycees. Since Kathmandu Jaycees is a leading chapter in Nepal and always dedicated to providing opportunities to many youth individuals to develop and bring forth their inner ability. Similarly, President: JC Suman Maharjan, Concerned EVP: JC Sudip Kumar Baniya, IPP: JCI Sen.Ganesh Prasad Poudel, Concerned VP: JC Anup Sunuwar, Conventional Director: JC Netra Prasad Guragain has also given their valuable speech on today’s inspirational program for the sake of National development through personal development.

During the same conference, we also did slight more talks with IPP, JC Sen.Ganesh Prasad Poudel, and JC Inu Thapa.

JC Sen.Ganesh told that Jaycees is a Worldwide Federation of Young Leaders and Entrepreneurs which has worldwide membership between the age of 18 to 40, with two objectives like leadership and entrepreneurship. He further told that all members of JCI worldwide follow “One man One post-One-year” ideology i.e. post circulation. Briefly, he told that JCI is a Junior Chamber International (JCI), established in America and flourishing its services in more than 110 countries, while in Nepal, there are around 138 branch offices of Jaycees and collaborate together to conduct “Leading Global Network of Young Active Citizens”. JCI Kathmandu Nepal is a pioneer Jaycees chapter in Nepal, situated in Thapathali, just side of PEA Association Pvt.Ltd (opposite of Trade Tower).

He further told that today AGM i.e. Annual General Meeting would be held and the new representative would be elected for 2017. At last, he told that Jaycees always dedicated to build up positive vibration among youth, provide free training on Leadership development, effective public speaking, entrepreneurship development, and parliamentary meeting procedure. Besides, JCI Kathmandu-Nepal conduct many other fruitful programs for community and individual development as well like Miss Nepal Beauty Pageant, Master Nepal, Little Lady Talent Show, Disable Song and Dance Competition etc.

Likewise, JC Inu Thapa told that being a woman, Jaycees has given a wonderful platform to be a leader and entrepreneur although there are the bunch of branches for Lady Members, such as within Kathmandu Jaycees, Kathmandu Jaycees and Kathmandu Lady Jaycees are apart but now Lady can also easily join in both of them.

So she suggested all females come front and show their potential and capabilities since Jaycees is waiting for enthusiastic members to establish them as a leader and entrepreneur. Apart from this, she told that she is also working in a Sky Moon Travels and Tours Pvt. Ltd and planning to be a successful fashion designer in the future. At last, she told that JCI is for everyone and follow fully a democratic methodology called “One man, one post, one year” so anyone can be a leader to do their own personal development, business development and national development.