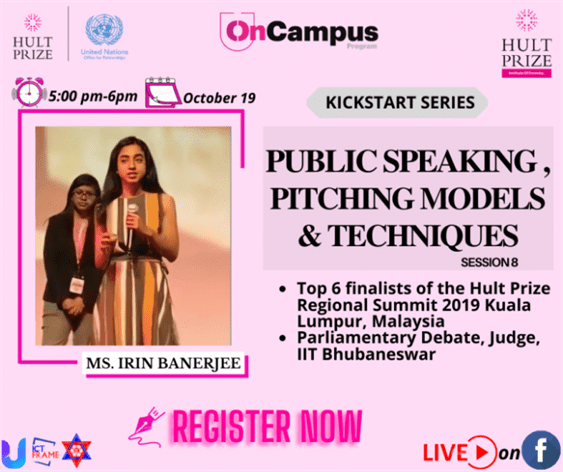 Hult Prize at IOF is conducting a webinar session on the topic ‘Public Speaking, Pitching Models, and Techniques’ on 19 October. With an aim to prepare the participants of the Hult Prize On-Campus event in the Institute of Forestry, the Hult Prize at the IOF committee has been conducting a series of webinar sessions called the Kickstart series, which has been facilitated by several national and international personalities. Running since 22 September, the 8th session of the series on 19 October will be the final session of the series. Coming into the series finale, the sessions have been able to cover several important topics for start-up entrepreneurs as in Public Speaking, Building Leadership Skills, Fund Raising, Event Management, Marketing, Public Relations, Green Business Startup, Food Industries: Challenges and Opportunities in Nepal, and Status of Food Policies in Nepal and their impact on Food Security and Food Enterprise.

The Hult Prize is an annual competition hosted by the Hult Prize Foundation that invites miscellaneous innovators from various universities all around the world to tackle a constraining social issue. Run in partnership with the United Nations, the students participating in the competition are asked to devise an idea about a scalable, sustainable social enterprise that can overcome the challenge put forward by the Hult Prize Foundation. The Hult Prize Foundation transforms how young people envision their possibilities as leaders to change in the world around them. With a US$1,000,000 global startup prize as its anchor activity, the Hult Prize has brought impact-focused programs, events and, training to over a million students globally, creating a pathway for youth everywhere to take action to build a better world.

The initial tier of the competition, the On-Campus event, is conducted in the various competing university premises. At the Institute of Forestry, the event shall be organized by the Hult Prize at IOF. As a non-profit-oriented platform, the first-ever on-campus representative of the Hult Prize, the Hult Prize at IOF 2020/21, is working on identifying the youths enrolled in the Institute, having pioneering ideas regarding an impactful social enterprise. With a large network of global entrepreneurs, the on-campus committee will be facilitating the participants of the on-campus program with various workshops and seminars and transform them to bridle the pressing challenge put forward for the year.

The session on 19 October will see Irin Banerjee from India as the Keynote Speaker. Banerjee was one of the top 6 finalists of the Hult Prize 2019 in the regional summit at Kuala Lampur, Malaysia. With her B.E. running in Jadavpur University, Kolkata, she’s been part of several projects as in FEATURE SELECTION USING NOVEL HYBRID OF NUCLEAR REACTION AND GENETIC ALGORITHM, a new feature selection algorithm combining Nuclear Reaction Optimization and Genetic Algorithm, COMPUTATIONAL TECHNIQUES IN APPLIED MOLECULAR BIOLOGY, a series of related works which involves the generation of graphs by calculating semantic similarities between GO terms, FRAME INTERPOLATION IN VIDEO,  experimenting with voxel flow methods for frame interpolation in videos, and  DEPARTMENTAL LIBRARY APP, a mobile application for students to issue books from the departmental library. She has also been decorated several times as in Parliamentary Debate, Judge 2020, Smart India Hackathon 2019, and 2018 Declamation Contest by the Ministry of Youth Affairs and Sports, Government of India.

All the sessions of the kickstart series have seen an overwhelming presence as anyone can participate in the webinar session. The sessions are also being broadcasted on Facebook Live. Interested people can visit the official Facebook page of the Hult Prize at IOF and fill-up the form to register for the session.