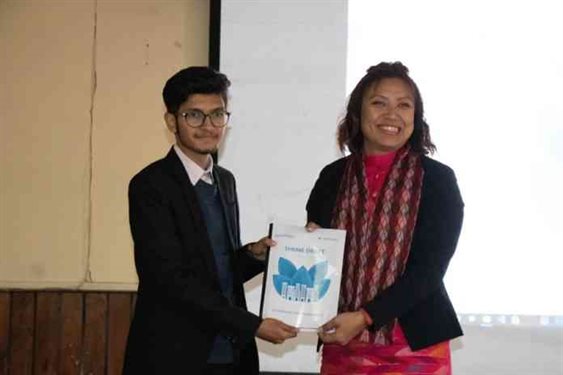 Locus, the annual technological festival organized by B.E. students from Electronics, Electrical, and Computer faculties of Pulchowk Campus, is back with its 17th edition for the year 2020. The theme release for Locus 2020 took place today, 27th December 2019 at Library Hall, Pulchowk Campus. Locus 2020, in collaboration with UN Nepal, has chosen three out of the seventeen Sustainable Development Goals as the theme for this year’s technological festival. Moon Gurung – Program Analyst, UN Volunteers,  Subhash Nepali – SDG Advisor for UN Resident Coordinator’s Office were the representatives present during the event.

The three SDGs that are chosen as the theme for Locus 2020 are:

Campus Chief of Pulchowk Campus, Prof. Dr. Laxman Poudel graced the event with his presence. During his speech, he mentioned that the campus is fully supportive of such a grand event and is determined to help Locus 2020 in the best possible way. He also pointed out Locus is a well-set event since it has already been organized for 16 years.

Dr. Shrestha congratulated Locus for gaining its official recognition as an organization in its 16th year of establishment. He also praised the organization for going global for the 17th edition in collaboration with UNDP.

Prof. Dr. Subarna Shakya, who was the HOD during the establishment of Locus in 2003 didn’t miss out to praise the previous 16 editions of the event.

Similarly, Dr. Arun K. Timalsina spoke about the reasons Nepalese innovators are lacking behind and said that they are ready to take any challenges put forward to them if given the proper opportunities.

Rajil Bajracharya, Editor-in-Chief for Zerone, the official Magazine for Locus talked about the background of the event and how it provides a platform to those who seek it. He introduced Locus as a series of dots that everyone connects uniquely hence creating their own version of Locus. He also mentioned the likes of Paila Technology, who were born from stalls at Locus, hence proving that Locus brings together future entrepreneurs and innovators alike. Although Locus doesn’t showcase futuristic designs, it acts on the fundamental aspects of the society to build stronger foundations.

Anmol Paudel, Research Coordinator at Locus 2020 closed off the theme release program by highlighting the reasons behind the selection of the three SDGs. He also mentioned the key points that the participants must be aware of before declaring their projects as thematic. He said that the SDGs have multiple goals under a single branch and a project has to fulfill any of these goals to be classified under the theme.