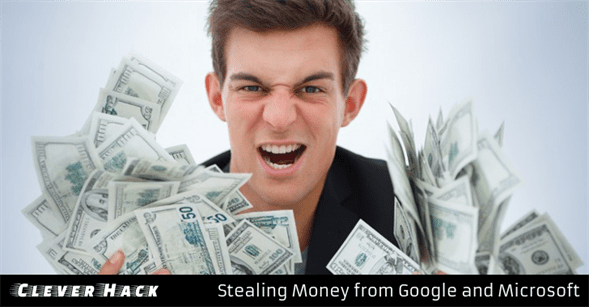 You might think of how to make more money just staying at home using the internet. So, all your passion will end now, since I am going to tell you how you can make money from Google and Microsoft through an example of Security Researcher Arne Swinnen from Belgium.

He is the Smart Hackers to find a loophole to steal the amount of cash from the big tech companies using a Premium Rate Phone Number. And he told that anyone could make fake Google, Microsoft or Instagram account as well as premium phone services and then link together.

Then after you can request for 2FA voice-based tokens for all fake accounts using automated scripts, placing legitimate phone calls to his service to earn a nice profit. And the purpose of using the premium number is that it will register an incoming call and bill the companies by sending you the access account code of them. And this will allow you to steal thousands of EUR/USD/GBP/.. told by Arne Swinnen.

Then he was awarded $2000 by Microsoft, and $500 for his bug bounty programs and even Google mentioned his name in the company’s Hall of Fame. But during all these processes, he had not put any one of the customer data at the stage to risk. So for this positiveness on the hacking procedure, he is likely to be praised.

So if you have also something planned like this, do like the way how he did but safeness is essential at your own risk, so pre-informed is better than doing any such hacking tasks.