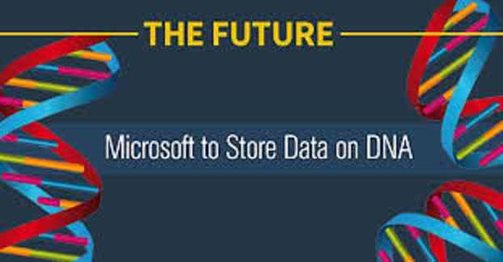 Microsoft to Store Data on DNA- 1,000,000,000 TB in Just a Gram, It is true that Microsoft can store any Data on DNA. The concept is similar to DNA molecules in biology to save a considerable amount of data. So Microsoft has purchased 10 Million strands of Synthetic DNA to change the future of data storage technology.

The volume and rate of production of data being produced and stored every day are so fast that the servers and hard drives needed to be replaced periodically increases the risk of corruption and data loss.

According to stats, it is found that 5.4 zettabytes of digital data are circulated and available worldwide and it is reached up to 54 zettabytes by 2020. For this reason, it is essential that we have to develop such a tool to store the extensive data, that’s why Microsoft has partnered with scientists at the University of Washington to focus on Using DNA as a storage medium.

The DNA concept is essential and needed as well to store a large amount of data as just 1gram of DNA can save close to 1Billion Terabytes of Data. It is far higher than conventional storage systems. Furthermore, the data stored in DNA can stay intact and readable for as long as 1,000 to 10,000 years. Not only this, the digital data that exists today would be stored in less than 20 grams of DNA.

In the press meeting, Microsoft Research’s Doug Carmean has demonstrated the initial tests done by the company that 100 percent of digital data encoded on DNA was recovered. Furthermore, in one statement of the American Chemical Society, said that the storing data on DNA could last up to 2,000 years without deterioration.

So the concept of DNA is beneficial and is needed as well to hold a large amount of data.