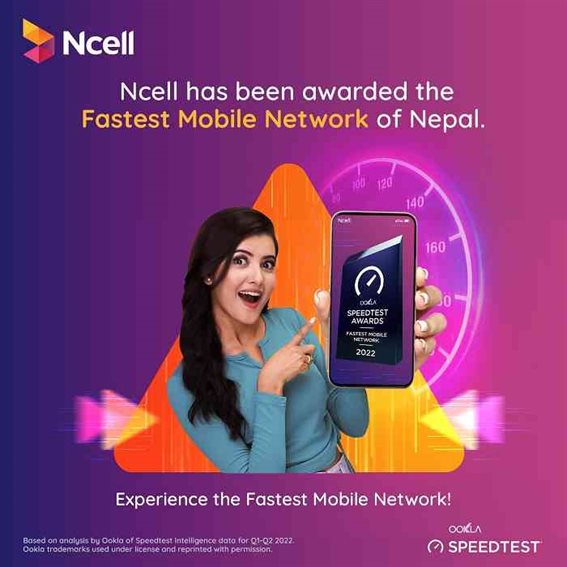 Ncell won the award for the fastest mobile network. Ookla, the world’s leading mobile and broadband network intelligence company, has given Ncell Asiata the Fastest Mobile Network Award in Nepal for January-June 2022.

This award was given to Ncell based on the speed score achieved by Ncell in the download and upload speed of its mobile data.

Ookla compared a total of 16 thousand 929 speed tests done by customers who are connected to the network of all the main mobile service providers in Nepal on its app Speedtest iOS and Android, which measures the speed of the Internet during the period from January to June 2022.

According to Ookla, the test results include “all” cellular tests conducted on devices identified as capable of achieving the fastest mobile speeds commonly available in the country.

Commenting on the award, Andy Chong, Chief Executive Officer of Ncell said, “We are delighted that Ookla, the world’s leading speed testing company, has recognized Nepal’s ‘Fastest Mobile Network’ in recognition of our continued efforts to connect consumers with the benefits of high-speed mobile broadband in Nepal.

This award is proof that we have provided service according to our commitment. I would like to take this opportunity to express my gratitude to all our stakeholders for their trust and support in providing the highest speed mobile data service to our customers. “

Every year, Ncell has been continuously investing in its infrastructure to provide quality services to its customers. Ensuring access to high-speed mobile broadband service 4G to 85 percent of the country’s population, Ncell launched this service in June 2017 and has now extended the service to more than 70 districts.

“The Speedtest Awards presented by Ookla are exclusive awards given to the world’s fastest and top performing fixed broadband and mobile service providers. We are happy to present Nepal’s ‘Fastest Mobile Network Award’ to Ncell.

This award is a testament to Ncell’s outstanding performance during the January-June 2022 period and is based on speed tests conducted by consumers themselves and Ookla’s rigorous analysis,” said Doug Suttles, CEO of Ookla.

In March this year, Ncell was honored with the “Telecom Company of the Year”, and “Infrastructure Initiative of the Year” awards for the establishment of an integrated data center in the ‘Asian Telecom Awards 2022’. Similarly, Ncell was honored with the ‘Excellence in Employer Brand Award 2022’ at the 14th HR Meet conference held in Kathmandu in April.