The contents of the press release are presented as followed:

The whole human race is struggling with the epidemic of Corona (COVID-19) plaguing the world with the crisis. Like other countries in the world, Nepal is fighting against the epidemic. With all the help and cooperation, the damage done by this calamity can be minimized. In the face of adverse public health situations, the alertness and awareness of the Government of Nepal, the stakeholders, the associations and the public is liberal.

The current crisis has further exacerbated the need for the use of the electric system in various sectors including governance and administration. The utility of various aspects of e-Governance (G2C), (G2B), (G2G), (G2E) services has been proven to be even higher. The use of technology exposed by the crisis will be given greater priority in the coming days. Also, it is important to be vigilant in dealing with the challenges posed by technology. Recently, news has come to the attention of society regarding unethical access and data security. The highly sophisticated details of private companies belonging to the corporate sector and citizens compiled by various associations are stored in a database of government-owned bodies which is easily accessible without fulfilling any criteria. This poses a question mark on data security. Also, if appropriate steps are not taken in a timely manner, there will be serious and abusive behavior in the future.

The state mechanism must be prepared to meet the challenges posed by technology. In the case of wrongdoing, it should create a legal action mechanism. With the increasing question on cybersecurity along with democracy and press freedom, the government urges the concerned bodies to investigate the facts of the incident and to bring them into action. Nepal e-Governance Society (NeGS) is ready for coordination and cooperation with the Government of Nepal and concerned agencies in Cyber Security. 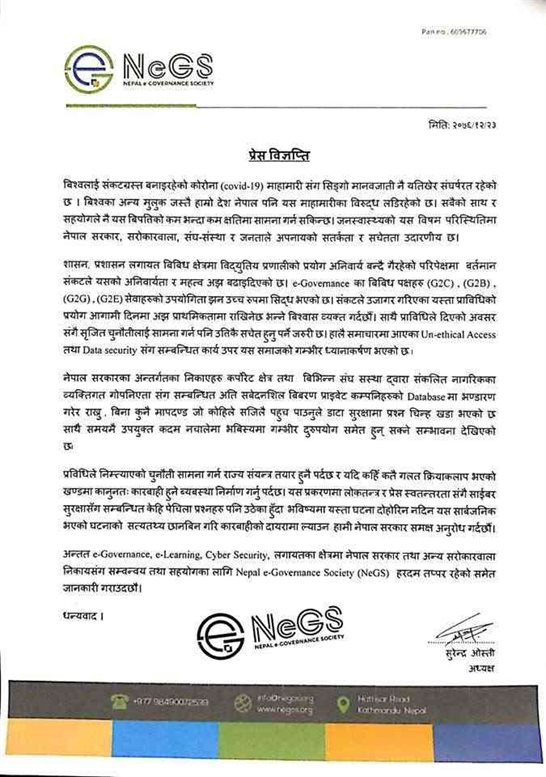