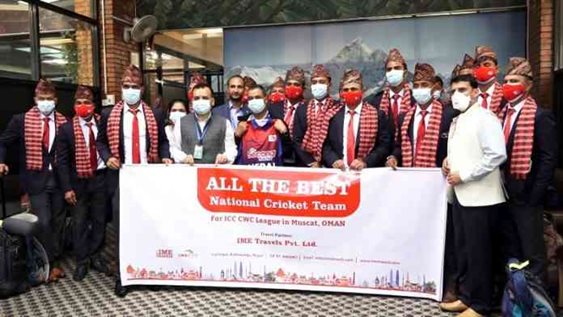 Nepal’s National Cricket Team has departed for Oman by SalamAir to participate ICC-CWC match being held in Oman. A total of 22 players including 17 players and 5 sports officials bade farewell by Hemraj Dhakal, Managing Director of the IME Group GSA for SalamAir Kathmandu.

The players of the Nepali national team have left for Oman today for the tri-series match to play among Nepal, Oman, and the USA under ICC CWC League.

Addressing at the farewell function, Hemraj Dhakal, Managing Director of IME Group, said that this is the first match among the 32 matches of the international series to be played abroad and expressed confidence that the victory would start from this tournament. Stating that the performance of the Nepali cricket team has made everyone optimistic, Dhakal said that cricket also plays an important role in the promotion of tourism in Nepal.

Likewise, Binod Das, Manager of Nepal’s National Cricket Team said that the support is given to him and his team by Salam Air which itself is an emerging business group in Nepal and very much popular in international flights has been very encouraging.

Chief Executive Officer of IME Travel (GSA for SalamAir), Binod Sapkota, said that he is delighted to assist the national team representing the national and international arena as the pride of the nation and expressed his commitment to continue such cooperation in the future as well.

IT Bill 2075 Control The Freedom Of Expression Psychologically, Raghuji Pant