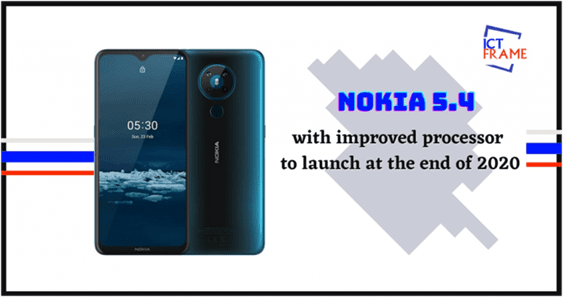 The Nokia launched 5.3 back in March, and now it is set to launch Nokia 5.4 at the end of 2020. Though the exact launch date is not confirmed certain details and rumored specs have been released about the phone.

Check the Nokia 5.4. Price in Nepal, leaks, rumors, and specs below.

According to reports, they claim Nokia will be making some changes to the front of the new device. Unlike the 5.3 that featured a 6.55-inch IPS LCD panel with a waterdrop notch on the top. The 5.4’s screen will measure around 6.4″ diagonally. This new Nokia will have a punch-hole setup instead of a notch design to house the front camera.  This phone will come in Blue and Purple shades at first, but more options for colors may be available later.

The new Nokia will also have a better chipset at the helm, but it’s unclear which one exactly. The Nokia 5.3 which is its predecessor has a Qualcomm Snapdragon 665 SoC. Thus it was underwhelming because its competitors were offering a much powerful processor MediaTek Helio G90T. But one integrated on the Nokia 5.4 will be more powerful. The reports further claim that 5.4 will be available in two storage configurations – 4GB/64GB and 4GB/128GB. In a related development, the 4GB of RAM and 128GB ROM storage configuration was spotted on two retailer platforms in Australia.

However, we are not sure about all the specs so we need to wait to see if it will be enough to challenge other midrange phones from the likes of Samsung and Xiaomi.

Talking about the OS, 5.2 is likely to feature Android 10. Its software experience will still be the major selling point of the device. It will offer a near-stock Android experience. The Android One Program will guarantee 3 years of security updates and 2 years of software updates. But considering  Android 11 has been released for nearly three months now, the new Nokia phone could come with the latest version instead.

According to the reports, the Nokia 5.4 will sport a quad-camera module like the Nokia 5.3. The back camera may be slightly better than the previous Nokia 5.3 camera.

The price of the new Nokia phone is rumored to be around AUD 370. Looking at that Nokia 5.4 Price In Nepal is Rs 34,000 approximately. Though there is no official confirmation in price. According to various rumor reports, Nokia 5.4 will be launched by the end of 2020. The launch is likely to be at the same time as that of the Nokia 7.3 5G.