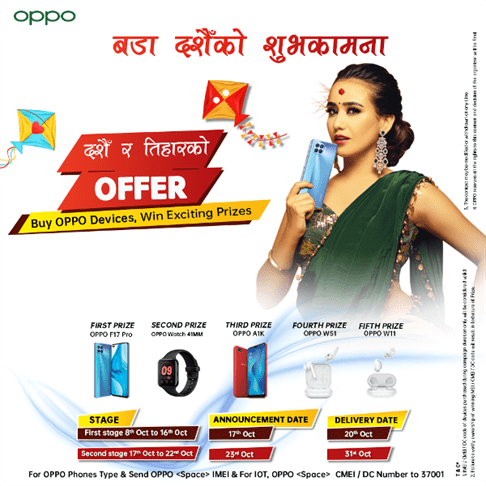 World-leading smartphone brand OPPO has announced its special gift campaign for the grand festivals of Nepal “BadaDashain and Tihar”. The “DashainraTiharko Offer”SMS Campaign will provide its customers with an amazing opportunity to win numerous attractive gifts on the purchase of OPPO devices during the festivity season.

“Being a global company, OPPO has always believed in localization. Nepal is one of the priority markets for us. Its richness in cultures, traditions, and simplicity in diversity has always inspired us. Hence, with an intention to celebrate the grandest festival of Nepal “The BadaDashain and Tihar”, we have introduced the “DashainraTiharko Offer” SMS campaign to share the happiness along with our valuable fans here in Nepal”, said Mr. Bobby Zhao, CEO of OPPO Nepal.

[Infographic] Do More, More Seamlessly with the Galaxy A72