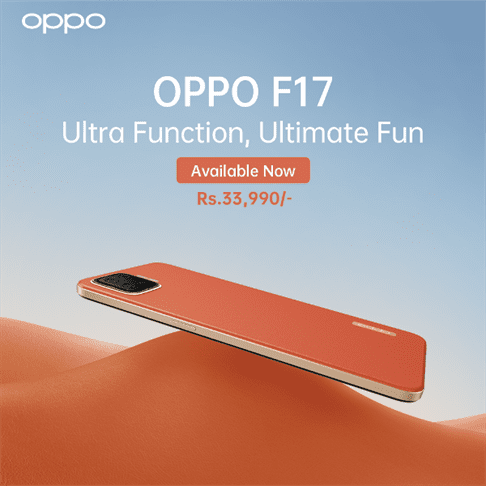 The OPPO F17 goes on sale for the first time in Nepal. The device was launched on 27th September last month along with the OPPO F17 Pro, OPPOEnco W51 TWS, and OPPO Watches. The OPPO F17 is the sleekest phone of the season with just 7.45mm thickness and weighing in at just 163 grams.

The OPPO F17 is now made available throughout Nepal via OPPO’s major offline retail stores. The device is made available in an 8GB+128GB variant, priced at Rs. 33,990/-.

One of the major highlights of the device is its weight. The OPPO F17 is slimmer than the Pro version at just 7.45mm and lighter by a gram weighing in at 163 grams. The F17 is powered by Snapdragon 662 SoCocta-core chipset clocked at 2GHz. The device runs on Color OS 7.2 based on Android 10.

OPPO F17 boasts a 6.44-inch Full HD AMOLED screen with a water-drop notch which houses the selfie camera. You also get an in-display fingerprint scanner. On the rear, there is a quad-camera stack with a 16MP primary shooter with f/2.2, and 8MP wide-angle camera followed by two mono sensors which complete the quad-camera setup. On the front, you get a 16MP shooter. The device is packed with a 4,015mAh battery with 30W fast charging support over USB Type-C port. The OPPO F17 comes in two color options – Navy Blue and Dynamic Orange – with a leather-like finish.