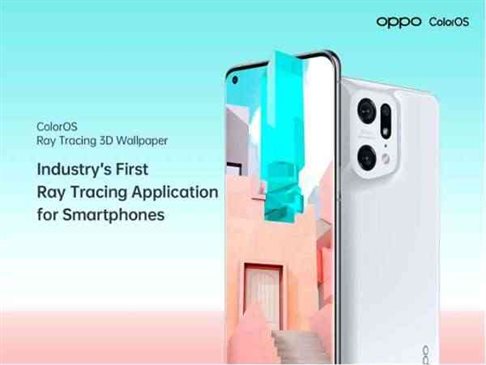 “As a technology pioneer, OPPO has always actively explored new opportunities to enrich the mobile experience for our users,” said Jane Tian, Head of the Graphics Product Management at the OPPO US Research Center.

“The ability to take advantage of ray tracing technology across smartphone devices will bring about more realistic gameplay graphics, for more immersive and competitive gaming. Our 3D wallpaper will also serve as a starting point to using the technology to explore future applications in smart devices.”

Ray tracing is a graphics rendering technology that simulates the physical behavior of light and has been adopted on computers in the past.

It also provides users with the ability to interact with their wallpapers through a series of hand gestures including rotating, tapping, and waving.

For the ColorOS Ray Tracing 3D Wallpaper, OPPO came up with a new approach to accelerate ray tracing performance by adopting hybrid architecture and dedicated hardware cores on the Find X5 Pro (Dimensity version), fully utilizing the potential of the MediaTek Dimensity 9000 chipset and the Arm Mali GPU.

The 3D wallpaper demoed at GDC 2022 is a testament to the company’s unrelenting effort to bring new technologies and creative experiences to mobile devices.

Later this year, OPPO will introduce the 3D wallpaper application as an APK to users of the Find X5 Pro (Dimensity version), as well as to global developers, artists, and designers in an SDK package to help enable their creativity.