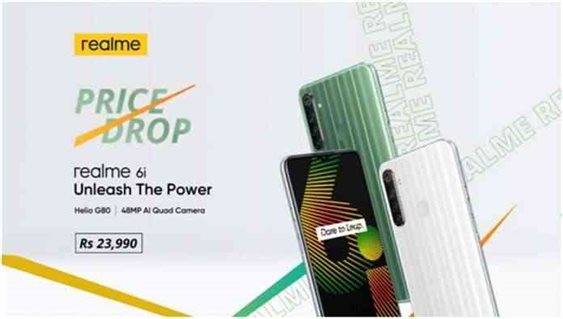 realme, the fastest growing smartphone brand, today slashed the price of its feature-packed mid-ranger, the realme 6i. The successor to the realme 5i, realme 6i brought huge upgrades in camera, performance, and design. realme 6i was the world’s first smartphone to introduce the MediaTekHelio G80 processor which ensures powerful and speedy performance for both mainstream users and gamers alike.

New buyers can now get their hands on the realme 6i at just Rs 23,990 for the top-of-the-line 4/128GB variant. This makes the Helio G80 equipped smartphone one of the best deals in its category. The Octa-core CPU has a main frequency of up to 2.0GHz offering 35% better single-core performance and 17% better multi-core performance than the previous generation. Paired with the Mali G52 GPU which delivers a performance boost of around 25% resulting in greater image quality and stable frame rate making it a great gaming smartphone.

The 48MP camera is no slouch either, the ultimately clear sensor helps produce some of the clearest and beautiful photos, easily punching above its weight. Complementing the main camera is its 119-degree 8MP ultra-wide lens, a 2MP portrait lens and a 2MP macro lens collaborated closely with one another. Results speak for themselves, a striking photo/video experience from multiple perspectives.

realme 6i comes with a 6.5” HD+ mini drop fullscreen which is 30.9% smaller than standard dewdrop displays. The big screen gives users an immersive experience when watching videos or playing games. Powering the big display is a long-lasting 5000mAh battery with support for 18W fast charging and triple safety protection.

realme 6i adopts classic designs from Naoto Fukasawa, adopting the rare spray coating process, the phone has been polished hundreds of times. As a result, the back of the phone shows an advanced matte visual effect, with a delicate and comfortable finish. The realme 6i comes in two young colors – Green Tea and White Milk.

Built on the new realme UI 1.0 with its second version in the beta phase, the realme 6i runs on Android 10 with Android 11 planned for roll out soon.

The realme 6i is now available across Nepal for a new price of just Rs 23,990.