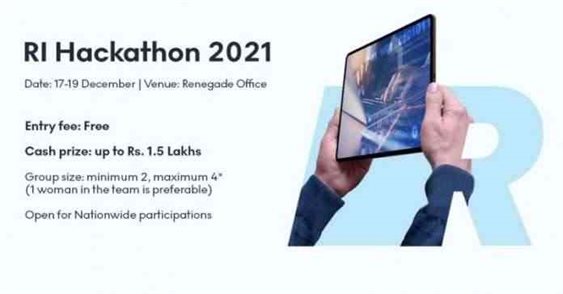 RI Hackathon, a nationwide event, will occur from 17th December to 19th December. This event will showcase the best tech talents the nation has.

Renegade has announced that the first RI Hackathon will be held this December. With the motive of gathering developers all over Nepal, registration has opened from 1st December (Link: Hackathon Registration Form ).

Developers from all over Nepal will compete for a chance to win a reward of NRs. 1 Lakh.

With partners such as Girls in Tech, Women and big data, and Genese Cloud Academy, the event is open to developers of all skill levels, including both novices and veterans in the field.

Hackathons are a great way to sharpen and test both your development and creative thinking skills, and RI Hackathon has a lot to offer in that regard.

From mentor sessions with accomplished industry professionals to networking with other participants and producing inventive solutions with blockchain, there’s something for everyone at RI Hackathon, even the casual enthusiast.

Mr. Abhinav Mishra, Head of Engineer, Renegade, said in a statement, “At Renegade, we are committed to giving back way more than what we have got from the developer communities.

Conducting a Hackathon is our way of giving this commitment an expression”.

Renegade Insurance (previously Covered by SAGE) is a US-based insurance brokerage organization that focuses on a multi-trillion dollar market.

Founded by Rashik Adhikari and  Doug Rowe, the organization seeks to disrupt the insurance industry through technological innovation.

Renegade is constantly on the lookout for the best talents to join our team and realize its vision of becoming a leader in the insurance industry.