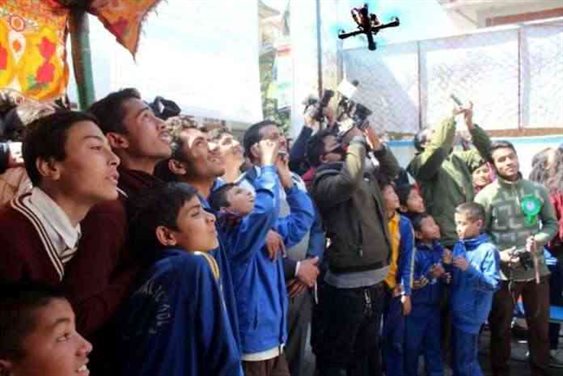 The students of Sahara National School located at Sankhamul, Kathmandu have made and tried drone that they made themselves. A science exhibition was conducted where they presented their talents and innovative ideas.

Sahara School, situated at the banks of Bagmati, had drone and robot as their major attraction in the exhibition. The drone has caught the eye of so many people these days. Drones are being used for entertainment to transport goods and even do harsh tasks that human can’t perform.

The students of Sahara School excellently presented it. They have proved that drone technology can be simplified and made in Nepal. During the event, they mentioned that if they get opportunities, they would like to manufacture drones in Nepal.

Likewise, the students also displayed app-controlled robots and line following robot. The robot controlled via phone apps can prove to be quite useful in daily chores. They say that these app-controlled robots are the brain of robots being developed all over the world. Recent use of such robots can be seen in restaurants to serve the customers and even to lift or carry heavy items.

Line following robot was also displayed during the event. These robots can be used in manufacture lines in industries. Likewise, they can be used to transport heavy objects from one place to another. They also said that these robots could be useful in cleaning houses or even as waiters in restaurants.

The volcanic eruption was also shown in detail by the students. Likewise, the phenomenon of copper plating, temperature and humidity sensor, crystallization, sound and air pollution, water cycle were included in the event. Effect of industries releases harmful gases in the air that cause the students also presented acid rain.

The topic of blood circulation was also included in the program. The causes of heart attack were also discussed. The students from class nursery to 10 took part in the science exhibition. The younger students showed simpler projects like models of zoos, fruit gardens, wild animals. They even displayed sand models of villages and cities during the exhibition.

The controller of National Education Board, Krishna Sharma inaugurated the event held on Friday. During his speech, he mentioned that education regarding science and technology being given to students from the base level is very motivating. By providing the students of the lower level with such a good platform, Sahara School has done a praiseworthy job.

Similarly, the Principal of Sahara School, Debendra Bikram Bhattarai said that the primary reason to organize the event was to connect the education system with technological and practical knowledge. He believes that this increases the skill level of students and makes them more functional. Sahara School organizes activities like football, martial arts, dance, music regularly. He added that Sahara keeps track of the student’s personal growth with such interdisciplinary activities. This boosts the leadership skills of the students and helps them add new skills in their arsenal.