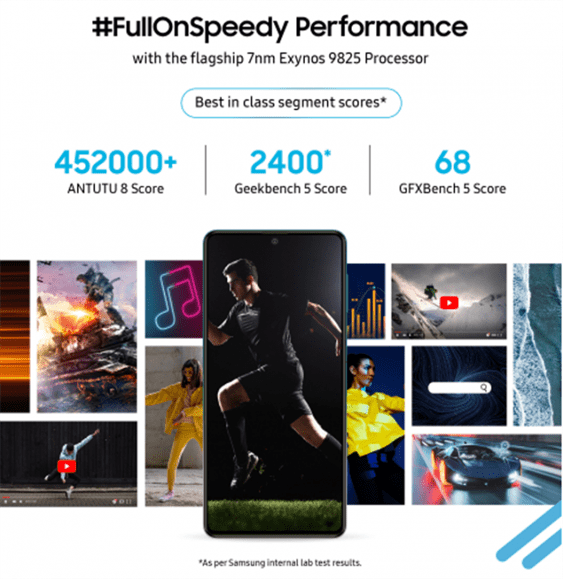 The big wait is finally over! After the recent success of the Galaxy F41 model, Samsung recently revealed that it will be soon launching the Galaxy F62 as its next F-series smartphone in India. Flipkart began teasing the arrival of a new phone the last week by just giving a glimpse of the device without even mentioning its name.

As per the reports, the Galaxy F62 will break cover at 12 PM on Feb. 15 in India. The image shows that it has a punch-hole screen, and its gradient-colored rear sports a square-shaped camera module with an LED flash just below it.

It is no secret that Samsung’s AMOLED panels have been one of the best in class -screen category for a long time. Your Samsung Galaxy F62 comes with a massive 6.7-inch Super AMOLED Plus Panel with FHD+ resolution which we have already experienced in the Galaxy M51 model. The display has an 86.7% screen-to-body ratio and an aspect ratio of 20:9, which supports a Full HD+ resolution of 1080 x 2400 pixels. One of the distinctive features of this smartphone is the display features a punch-hole cutout housing the selfie camera.

The Dimension of the phone measures 163.9 x 76.3 x 9.5 mm and it weighs 218g which. The back panel of the phone has a laser gradient panel and a Samsung branding on the rear panel. Another distinguishing feature of this phone is, it has a side-facing fingerprint reader. It is available in three different color models — Laser Green, Laser Blue, and Laser Grey.

Since the device is powered by Samsung’s flagship 7nm Exynos 9825 processor, so it delivers next-generation mobile experiences in gaming, graphics, photography, battery performance, and AI.

The device is also powered with the industry’s first 7nm EUV processing technology to improve gaming experience and graphics performance.  And the phone comes with an Android 11 OS with One UI 3.1 on top.

The Samsung Galaxy F62 runs on an octa-core processor with a two-year-old flagship chipset Exynos 9825 complemented by 6GB and 8GB RAM and 128GB storage. You can even expand using an external SD card if the given storage doesn’t fulfill your storage requirement.

The Samsung Galaxy F62 features an impressive quad-camera setup 64MP primary camera, a 12MP ultra-wide camera, and two 5MP macro and depth sensors. For selfies, the handset features a stunning 32-megapixel front camera. With this brilliant quad-camera set-up, the Samsung Galaxy F62 skillfully captures the most stunning landscape shots, portraits, panoramas, and macro shots. Since the camera setup is similar to what we get in Galaxy M51, so it could be using the Sony IMX 682 as the main sensor.

Samsung has always impressed the customers with its battery prowess but this time, it has raised the bar too high!  It is the second smartphone from the company to feature a battery with this capacity after its Galaxy M51 model.

With such a huge battery capacity, your phone will last for a day or even two. Perfectly supplementing its powerful processor, this ultra-powerful battery will surely enhance non-stop gaming, internet surfing, and binging on your favorite shows.

Along with the handset, you will get an in-box Type C 25W superfast charger that recharges your smartphone’s battery in less than 2 hours. Also, it provides a reverse charging feature and comes with a Type C to Type C cable, enabling you to share power on the go.

If you are on the lookout for a high-performing device that lets you stay at your productive best, the Samsung Galaxy F62 is your best bet.

Considering that it is expected to be priced around Rs.38, 399 and Rs.41, 599 for each variant respectively in the Nepalese market.