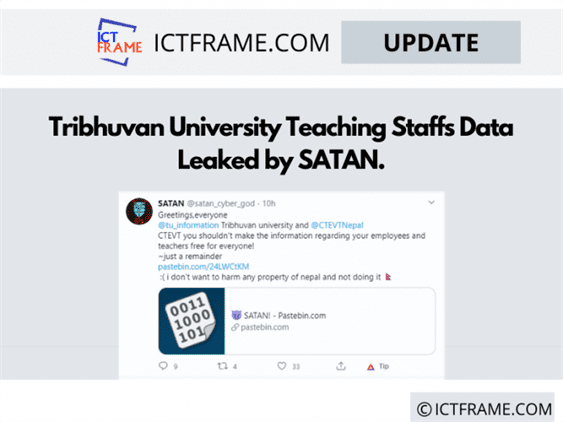 SATAN (@satan_cyber_god), a twitter sensation hacker has leaked data of Tribhuwan University Teachers and Staffs. Recently, through a Twitter handle with username @satan_cyber_god, the hacker made public the names, departments and email addresses of teachers of Tribhuvan University and CTEVT. Blood groups with their designations have also been made public.

The hacker has also warned CTEVT to secure its data.

Greetings,everyone@tu_information Tribhuvan university and @CTEVTNepal
CTEVT you shouldn’t make the information regarding your employees and teachers free for everyone!
~just a remainder https://t.co/4v4G1VQLQI
🙁 i don’t want to harm any property of nepal and not doing it 🇳🇵

He leaked data of 69 people through Pastebin. The link to the Pastebin had been shared to Twitter. Although the data of different departments have been leaked, leaked data contains data from Medicine Department the most. 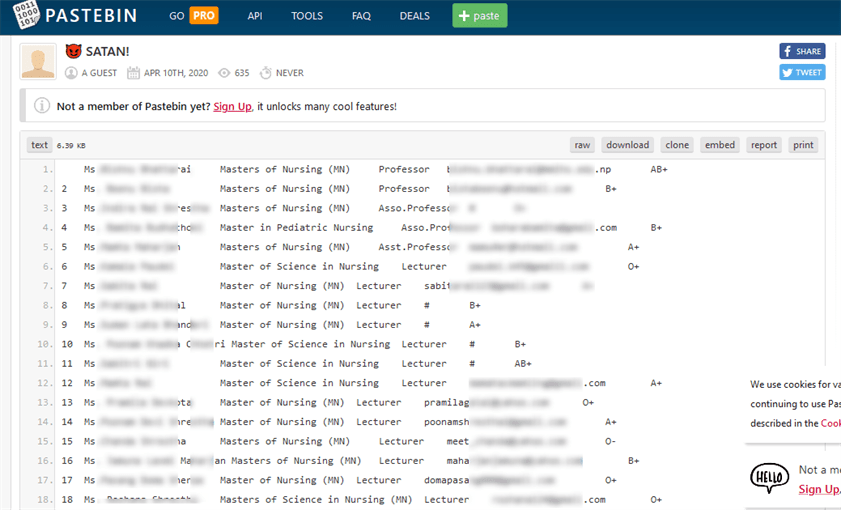 Earlier, the hacker claimed to have leaked the data of Prabhu Money Transfer under Prabhu Group as a demo data. The leaked data included 406 people’s data including, Name, Email Address, Phone Number and IP Address.

As i said this is just a demo!
I am just informing everyone how weak or system is!
This is not a breach!https://t.co/wU9dDyNp8x

The same person has also warned Nepali Congress to secure its system else he’d leak the data along with donations received.

If you think we are doing wrong,let us know!@Nepali_Congress Please secure your data including all the donations and other information,don’t weaken your citizens. Don’t make us do it again

~Justice will now be served!

He also said that he’s leaking 150K people’s data and made it clear that it’s not a Nepali data. He said, ”I love my country! Just tried to alert everyone about bugs.”

Those who are making fun of SATAN don’t have common sense that people can create accounts with random email addresses.#shit_really_gonna_get_real_now
150M users data coming tomorrow!
Not Nepali data though!
I love my country! Just tried to alert everyone about bugs🇳🇵