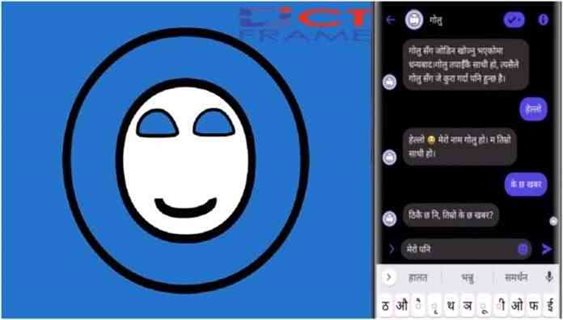 The wave of Corona has created a devasted scenario. People were unknown about the virus.

People could ask about Corona on Golu’s Messenger. Golu would respond immediately and help convey accurate information about the corona.

Golu is a chatbot. In simple language, a chat robot. It can also be understood as Artificial Intelligence (AI).

It already contains answers that match the question.

According to the question, it answers itself. This service has become common abroad. It is also being used by some business entities in Nepal. Golu, on the other hand, seems to be a little different as he speaks in Nepali.

Golu was built by scientists Bishesh Khanal, Azad Chhatkuli, Dandapani Poudel, Binod Bhattarai, and Suman Raj Bista. They are doing this through the software company ‘Dio AI Technology’. All five are co-directors of the company.

‘Some of our banks have put chatbots on their online services. But they are rarely used. Due to the lack of English language and many features, it has been used less, ‘said Golu’s co-producer Vishesh.

He is an expert in artificial intelligence research. It has been three years since he returned to France, Switzerland, and the United Kingdom for eight years to conduct research-based studies.

In particular, Azad and Suman have been friends since studying at the Pulchowk Engineering Campus. Dandapani had a special meeting in London while studying for a master’s degree and Vinod. In this way, five people became friends through special means and they have been cooperating for the last six years.

How was Golu Named?

There is no special reason behind naming Golu. This is what everyone on the construction team liked in the process of finding an easy-to-remember, short and fun name. The name of the company has been kept in mind. The symbol of light, the idea of ​​giving light through technology, was chosen by the special.

The use of the Golu by these five scientists to provide information about the corona is not limited to this. Here people can ask any kind of question. Golu talks back, answering in a pleasant way. If there is no answer to any question, he also says ‘I don’t understand.

Golu lets you read jokes, news, horoscopes as well as attendance answers. The company has also identified Golu as a talking robot friend when he is lazy or looking for someone to talk to.

‘People liked this chatbot and a lot of questions started coming up. And we added and updated the program and made it possible to ask any questions, ‘said the 34-year-old special.

It has been only one year since Diyo was established. But he has been active in this work since his return to Nepal. He co-founded Diyo in 2018 with three other co-directors and three other friends.

It is a reputed non-profit organization that conducts research on AI and computer science in Nepal. The lamp has come into operation under this organization.

‘Research in Nepal is very weak. So in the beginning we had a reputation for doing something in this area, “We used to do research on how to advance advanced technology, mainly in Nepal’s industrial sector.”

For two years, he worked with some financial support. He said that the research could be carried out better if the money could be raised by working later.

While working at Nami, Vishesh and his friends got a close look at the business area here. Although there are many technology brands, most of the products have special experiences made by learning from abroad.

He says, ‘Learning from foreign technology is not wrong. But what is going on abroad may not be suitable for the Nepali environment, it should be brought only after research.

Therefore, Diyo is trying to bring necessary, suitable, and effective techniques according to the environment by studying.

A chatbot is the result of such an effort. It is said that information about any organization or product can be easily obtained from Diyo’s chatbot.

For example, ask someone for information about a bank’s services. You can go to its online platform and type in Nepali language or Roman. The answer comes from Uta in Nepali. This technology will be more useful not only in banks or companies but also in health, education, and agriculture.

‘Farmers do not have to look for experts to inquire about plant diseases. You can find the answers by going to the agriculture-related website with chatbot facility, ‘says Vishesh. With chatbot technology, you don’t have to ask for help from others for small things. ‘

Currently, Diyo is providing three types of services including chatbots. ‘Intelligent Web’ is another service in which the company builds an intuitive website using AI according to the needs of the local environment. And there is augmented reality (AR) technology. It is a technology that allows you to see something directly through digital media.

Now this service has been brought to jewelry shops. From this, you can go to the website of the shop and see if the jewelry is suitable or not.

After clicking on the photo of your favorite jewelry, the camera opens and it looks like you are wearing it on your own ear or neck. AR technology can also be used on online learning platforms. Students can experience things from a computer, just as science subjects are before their eyes.

According to the special, these services have been brought by Diyo keeping in view the Corona epidemic. Customers do not have to go to a jewelry store in a crowded place. Students can also experience physical classes online. Currently, Diyo is providing these services to Helmets Nepal, Amazon Web Service, and Utsav Jewelry.

According to the special, the amount of chatbots is decided on the basis of which level. Generally, the fee can range from two to three lakhs to 25-30 lakhs. It is expensive to work on the bank’s website for security reasons. Cheap to create a chatbot that only returns answers to questions. For AR, Diyo has not brought such an expensive facility, now it starts from Rs 1.5 lakh.

In the early days, they had trouble getting their services to the Nepali market. The operators did not know much about the market here. “Some of the software companies here are going to make the money and not do as they say,” he said, “so it’s hard to trust the software company.” It took a lot of effort. ‘

He says that the number of service seekers has decreased as most of them are not aware that AI technology makes many things easier.

What does he speak about AI?

The future of the world is dedicated to AI, so we should not fall behind in the old ways,” he says It is important to explain the benefits to the market so that software companies can create more effective products and sell them to foreign companies in the future.

According to him, AI can play a big role in economic transformation. But most of the technology we use is advanced without research, so users are not able to adapt. He says technology will not be of much use unless companies research the easy way to serve customers.

“Our aim is to localize AI with the Nepali environment,” he said. “Nowadays, AI is used in most areas. We are not able to take advantage of the way it has gained momentum. ‘

Leading IT Company Of Nepal