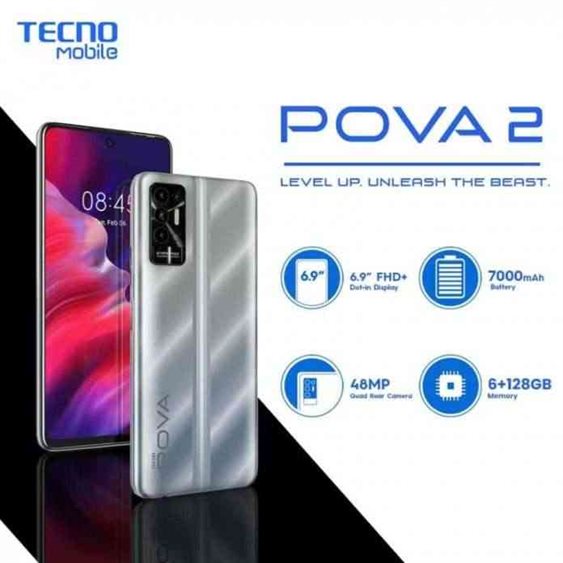 Tecno is a Chinese smartphone brand, has launched a new budget-friendly gaming phone. This phone is dubbed as Tecno POVA 2. It offers several upgrades such as a faster chipset, a massive battery, fast charging as more.

So, let’s look at the specs, features, and pricing of Tecno Pova 2.

Tecno Pova 2 is now officially available in Nepal. The budget smartphone of Tecno brings an Helio G85 chipset and packs a large 7000 mAh battery. You’ll also have a quad-camera setup at the back of the phone with the 48-megapixel main sensor. Also, the Tecno Pova 2 comes in a single configuration.

Design and Display of Tecno Pova 2

While talking about the display, Tecno Pova 2 has a large 6.9-inch IPS LCD screen. The full HD+ centered punch-hole display with a resolution of 1080 x 2460 pixels. It offers a 60Hz refresh rate, and for faster screen response time it boasts a 180Hz touch sampling rate. Also, the display is surrounded by thin bezels, but prominent on the bottom.

Moreover, the Tecno Pova 2 comes with a polycarbonate body. It also has a rectangular camera module and a Tecno Pova branding on its rear. Also, has a vertical stripe in the middle of the rear panel which gives a flashier look. In addition, this smartphone is available in 3 shades Blue, Black, and Silver.

In terms of the camera, the smartphone features a quad-camera setup on its rear. Also, the setup is highlighted by a 48MP primary camera with an aperture of f/1.8. Along with a triple 2MP lens for macro, depth, and AI lens. Moreover, there’s an 8MP selfie snapper inside the punch hole.

The Pova 2 comes with MediaTek’s Helio G85 SoC gaming-centric processor. It’s a 12 nm chip with the prime core clocked at 2.0Ghz coupled with a Mali MC2 GPU. Also, this smartphone comes with more memory with 6GB RAM and 128GB onboard storage. You can also expand using a microSD card if necessary.

Moreover, the Tecno Pova 2 operates on HiOS 7.6 based on Android 11.

Tecno Pova 2 Battery and Other Features

Whereas, for connectivity, the Pova 2 offers support for dual-band Wi-Fi, Bluetooth, GPS, 3.5mm headphone jack, and a Type-C port.

Finally, you’ll have a side-mounted fingerprint reader and a face unlock for security.

Now, let’s look more into its specifications below.

The new Tecno Pova 2 is officially available in Nepal at NPR 23,990 for the 6/128GB variant. Also, it’s available at Tecno authorized retail stores across the country.

So, this is it! We have covered almost every feature of the Tecno Pova 2 gamins smartphone in the budget segment. With this smartphone, you’ll be able to play games on medium to low settings without any major lags.

We hope this article is helpful to get insights into the new Tecno Pova 2 smartphone. Let us know if you are already using it.

Or, if you have any queries and suggestions regarding this phone, you can comment below. We’ll get back to you as soon as possible.

Lead The Selfie Trend With OPPO A7 And A3s In Excitingly...