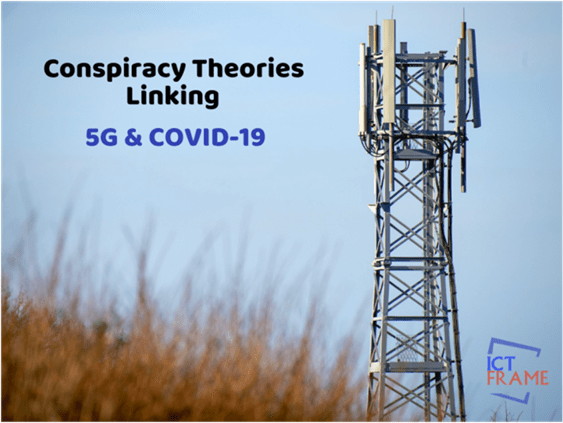 It seems like Coronavirus has a fierce competitor, and it’s just the misinformation surrounding it.

There is a baseless conspiracy circulating the virus linking it with 5G networks. Yes, yet another conspiracy theory to the growing list of potential causes of the COVID-19 outbreak. This time the people are blaming the 5G, the fifth generation of Internet communications technologies for causing the pandemic.

Well, that does seem unlikely, doesn’t it? The death toll expected to the pandemic has hit six digits recently infecting more than 1.8 million people so far.

So wait, how could telecom or the internet be related to the spread of a deadly virus? Oh, you would be surprised by how people are connecting the two.

A variation of the conspiracy theory is that there is no outbreak of COVID-19 Coronavirus. All the tests that you hear celebrities are getting and the severe acute symptoms of the SARS-CoV2 that medical professionals and scientists are dealing with is a part of a hoax.

Yes, we are not saying that. This particular theory also claims that the radiation from 5G is what’s causing the symptoms.

Some people are certainly getting creative!

Another variation says that the radiation from 5G can weaken your immune system to the point that the COVID-19 virus can easily infect you. The claim is that 5G and its ‘deadly’ radiation is the cause of a global pandemic.

People have to be watching some severe science fiction lately…

Trust us; this is not the end of it! There were attacks on cell phone towers in the U.K. Officials have expressed their concerns following the attack and have claimed that the attacks were motivated by false conspiracy theories. Meanwhile, celebrities like Woody Harrelson and singer M.I.A. are among the influencers who are spreading such claims to their millions of followers.

There is no problematic evidence to support the COVID-19 and 5G theory, but still, the conspiracy theories are thriving.

Before getting into the baseless reasons for the circulation of theories linking 5G and COVID-19, let’s understand how 5G works.

5G is the 5th generation mobile network. It is a new global wireless standard that is expected to enable a wave of technologies that will change the way people live and work. It can deliver higher multi-Gbps peak data speeds, ultra-low latency, massive network capacity, more reliability, and more consistent user experience to more users.

The potential applications of the 5G include remote surgeries, automated factories, self-driving cars, etc. The main differences between 4G and 5G are better speeds, higher bandwidths, and lower lag time.

The 5G signals run over new radio frequencies, which require the installment of cell towers and updating radios.

Why Are People Linking 5G and COVID-19?

But, does correlation always imply causation? It looks like conspiracy theorists certainly think so.

People even shared two maps of the United States on the internet, suggesting the areas that had been hit hardest by the virus spread. And no brainer here, these areas had 5G networks installed.

Was it the radiation? Or perhaps just the fact that those are metropolitan areas that have a large population and more vulnerability to the virus spread.

Many supporters of this conspiracy theory are linked to groups that have long claimed that wireless airwaves cause cancer, although there is no credible evidence to support the theory.

But, people sometimes can be very ambitious. Here’s an example: 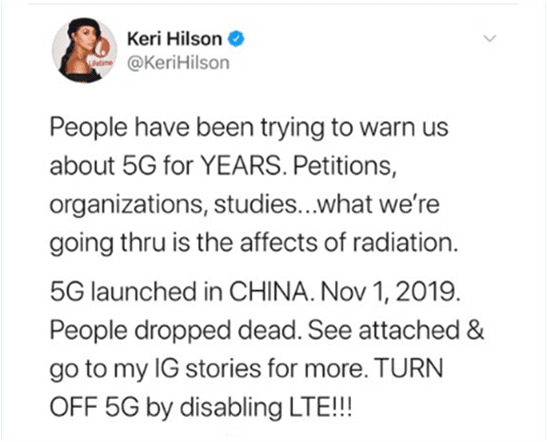 Quite an argument, it seems. Something happened, and something else happened, so why not go ahead and put 2 and 2 together!

Here’s another tweet that takes the timing correlation one step further: 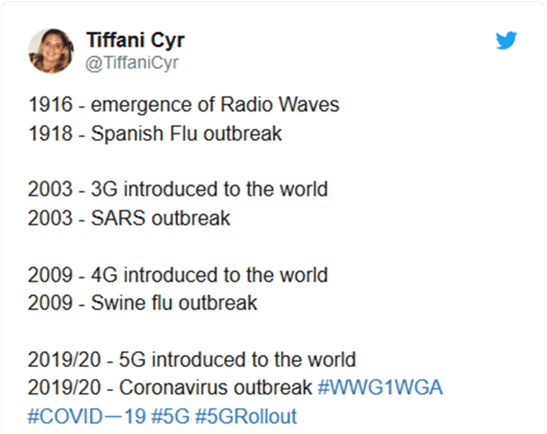 Umm sure, how very convincing.

Let’s just be aware that two things happening at the same time doesn’t necessarily have to be connected. And, this link between 5G and Coronavirus is just absurd.

Research shows that the radiofrequency waves from cell phones do not have enough energy to damage D.N.A. directly or heat body tissues. 5G signals can’t even penetrate objects better than 4G.

The ICNIRP confirms that there is no link between 5G and Coronavirus.

“The principle that 5G might compromise the immune system and thus enable every person to get sick from the corona is based on nothing,” Eric van Rongen, chairperson of ICNIRP, wrote in an e-mail to CNN.

There are no symptoms from scientific studies that 5G affects the immune system. If that were the case, we would have seen effects on the scale and severity of infectious diseases already decades ago. And we don’t.

What Steps Are Being Taken To Limit The Spread

By spread, we mean the range of misinformation and conspiracy theories. Social media and internet platforms have started to take action to limit the misinformation spread.

Some YouTube videos claiming a connection between 5G Network and COVID-19 have racked up thousands of views. Such content is now being classified as ‘borderline content’ by YouTube, which means they won’t show up much.

Twitter said it was increasing its usage of Learning machines and automation to take down false information. “We will continue to take measures on accounts that violate our rules and regulations, including content about unverifiable claims which incite social unrest, broad panic,” a spokesperson for the company well said. “If every person sees anything suspicious on our service, please report it to us.”

Similarly, a spokesperson for Facebook said the company is taking “aggressive” measures to combat misinformation surrounding the virus. Also, the platform is “starting to remove false claims which link COVID-19 to 5G technology,” and which encourage attacks on cellular towers.

How Technology Is Used To Fight The Corona Virus Pandemic