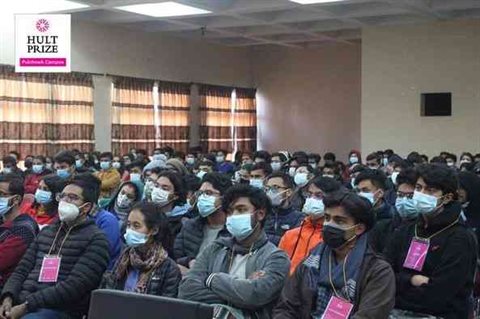 The Hult Prize is an annual, year-long competition that crowdsources ideas from university-level students after challenging them to solve a pressing social issue around topics such as food security, water access, energy, and education.

Climbing through multiple rounds of pitching and re-innovating; while connecting the startup with the ground reality, the winning business idea gets a seed funding of 1 million dollars and massive global acceleration to create “THE” impact.

The Hult Prize is validated as “the Nobel Prize for undergraduate students” around the world.

Hult [email protected] Campus is the On-campus episode for the big prize.

The first orientation session of the On-Campus has been completed at Pulchowk Campus!

With 200+ door registrations and 100+ pre-registrations, “overwhelming” would be cut-rate to describe the response for the orientation from the student body.

The orientation was graced by the Campus Chief, Dr. Indra Prasad Acharya, and Dean,  Prof. Dr. Sashidhar Ram Joshi of IOE Pulchowk Campus. Alongside, Dr.Basanta Joshi, the assistant professor at the Department of Electronics and Computer Engineering, Pulchowk Campus, motivated the pool of participants with his insightful talk on how technology and innovation are changing the face of the world we know at the event.

The inquisition and energy in the room of undergraduates were exhilarating to witness.

The event received immense support from the Hult Nepal community as well, marked by the gracious presence of the community builder, Mr. Sujen Shrestha himself. Mr. Shrestha delivered the crux of the Hult revolution and elaborated this year’s theme “Getting the World Back to Work ” to the audience.

As the event advanced, a note about the how-to’s and know-hows of the On-campus were given voice to by the Campus Director and the Event Manager of [email protected]

Plus, campus representatives selected from 10 different colleges were all eyes and ears at the orientation, all energized to amplify the revolution at their home colleges.

Not to miss, two pleasing musical performances were the cherry on the cake in the orientation. The whiplash of energy and oomph set the audience to hum and sing in harmony to the performers.

The Hult orientation at IOE, Pulchowk was definitely a wholesome event, many impact-makers who burgeoned in the premises would attest to our verdict!