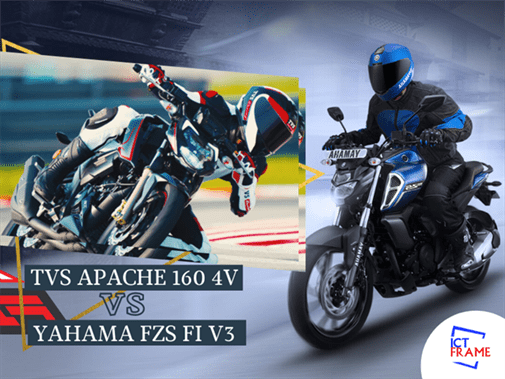 The battle between TVS and Yamaha is getting real. Just a few weeks back, TVS NTorq was declared the highest-selling premium scooter in Nepal. Yamaha, on the other hand, is the first to bring FI into the scooter industry!

Now, the battle is for the crown to become the lord of the streets! TVS comes with the all-new TVS Apache 160 4V and faces Yamaha’s FZS FI V3. Will the new TVS force beat the Yamaha domination?

Let’s have a look at the specs, features, and price in Nepal for both these bikes.

160 Apache gets the benefit of higher engine displacement and better ground clearance.

The all-new Apache 160 has all LED lights. Sadly, Yamaha FZS FI comes with a bulb tail light. This is not a big dealbreaker.

A shorter rider will ride the FZS FI V3 much easily. Its seat height is 10mm shorter than Apache 160.

Even though the FZS FI V3 is the latest update to the FZ 150, it still feels a bit outdated when you compare the features to the all-new feature-full Apache 160! The split seats, low fuel warning lamps, and low battery indicators are some of the new features missing on the FZ bloodline.

Now there may be a clear winner here. Apache 160 4V is new, has more features, and costs less than the Yamaha FZS FI V3.

However, the Yamaha has stood through the test of time and proved that its engine is solid! The repair and maintenance costs of Yamaha are also less and its spare parts are easily available. It’s a machine you can rely on.

If you’re someone who doesn’t like taking the risk with investment, we say go for the Yamaha FZS FI V3. You won’t regret the choice, at all!

But, if you want those extra features and new styling, hop on with the TVS Apache 160 4V!