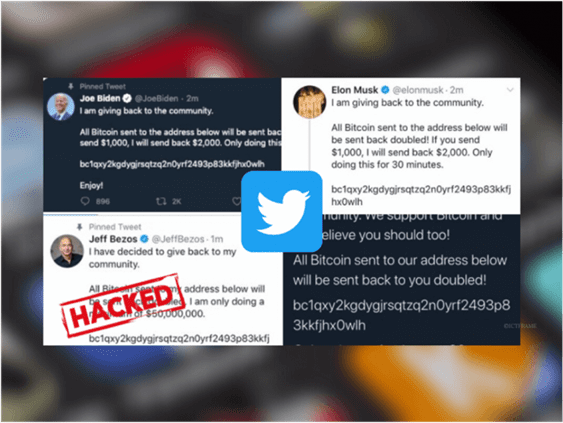 Billionaires Bill Gates, Elon Musk, and Jeff Bezos are among the many prominent personalities who suffered a major Twitter hack.

The official Twitter accounts of such popular people and also companies were hacked in an apparent Bitcoin scam.

Moreover, the official accounts of Barack Obama, Joe Biden, and Kanye West tweeted requesting a donation of a thousand dollars in cryptocurrency (Bitcoin).

In fact, companies like Apple also fell victim to the cyberattack. “We are giving back to our community, “ said a tweet from Apple’s official account. “We support Bitcoin and we believe you should too!” 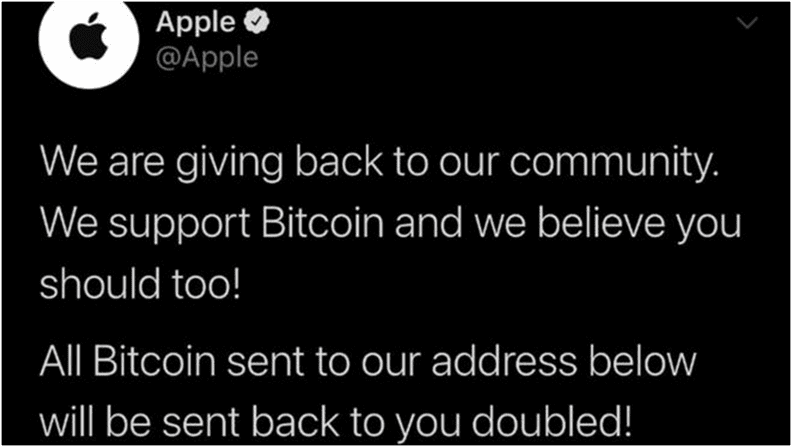 Twitter removed all these “fake” tweets within a few minutes of posting. Also, it took immediate action to stop certified accounts marked with blue ticks from tweeting altogether.

CEO Jack Dorsey tweeted on Wednesday, “Tough day for us at Twitter. We all feel terrible this happened.”

He informed that Twitter started diagnosis of the attack and would share everything as soon as they find more information.

Similarly, the social media giant denied password reset requests and disabled other “account functions” for a while.

At least it is what Dmitri Aperovitch, Co-founder of Cybersecurity company CrowdStrike said according to a BBC report.

The official account of the Chief of Tesla and SpaceX, Elon Musk, tweeted about doubling any Bitcoin payment sent to the address of his digital wallet.

Who Was Behind The Attack?

BBC reported from a security source that a web address – cryptoforhealth.com – was registered by a cyberattack using the email address [email protected].

“Anthony Elias” registered the website. Or, at least the attackers used this name for the purpose.

Cryptoforhealth is also a registered Instagram handle set up contemporaneously to the hack.

“It was us”, read the description of the profile alongside a smiley emoticon.

Furthermore, there was a story on the Instagram account with a message. It read: “It was a charity attack Your money will find its way to the right place.”

Certainly, the attackers could’ve done much worst and caused a lot more damage with such power at their fingertips. However, the motive seems to be making as much money as they could within a short span of time.

The official Twitter Support (@TwitterSupport) account tweeted that it is well aware of the security incident impacting users on Twitter. In addition, it said that it would update everyone shortly.

The FBI’s San Francisco field office put out a statement advising people not to engage in such scams.

Check Out: European Supercomputers Hacked to Mine Cryptocurrency

Inauguration of Branchless Banking at Gaindakot