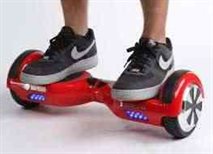 A Self-balancing two-wheeled board also is known as a self-balancing electric scooter and also as a hoverboard is a rechargeable battery powered portable motorcycle. They generally consist of two wheels arranged with two small joints between the wheels where the rider is allowed to stand. The scooter is controlled by the feet of rider who holds on the built-in gyroscopic, sensor ed pads.
Several such gadgets were invented in China in 2014, and they became famous in the United States by 2015. Many celebrities were seen on their hoverboards in 2015. There is no universally approved name for this device as its names can vary according to the companies which distribute it but not according to its manufacturing company. They are powered by Li-ion batteries. The leading distributors of these devices are Cyboard, Airboard, Future Foot, Eastway, Hovertrax, Oxboard, IO Hawk, Soar Board, Phunkee Duck, and Skagway.

Cake Sewa Comes With A Bang, ICT Startups And Innovators