A few months back the full specification of Samsung Galaxy Note 9 was leaked. Likewise, its retail box also got leaked which includes pretty much all of the specifications. And now there is a reveal of Oppo A7 specs which has not been launched yet. The specs are just rumors for now so we don’t need to worry whether it will be convincing one or not.

As per the suggestions, Oppo A7 comes with 6.2-inch display with a resolution of 1520×720 pixels. Similarly, it has a high chance to run on Snapdragon 450 Soc guided by the Adreno 506GPU. In case of storage, it is expected to come with 3GB and 4GB RAM with only one storage option of 32GB but can be expanded. 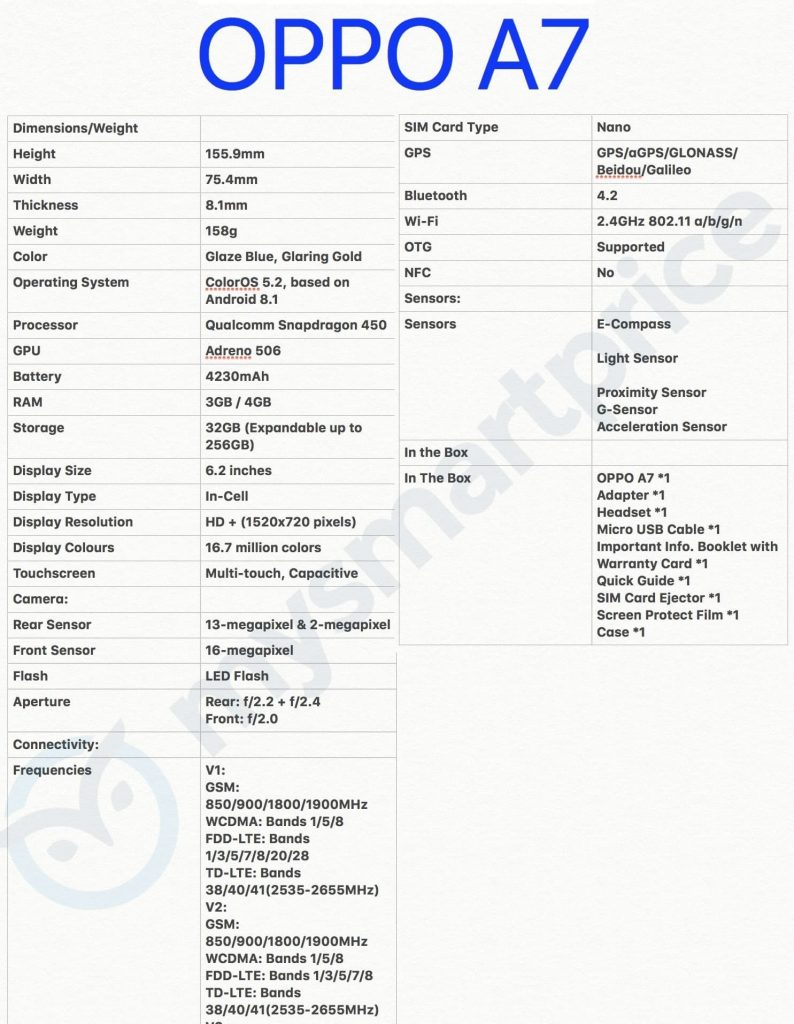 The device will prolly feature 13MP f/2.2 and 2MP f/2.4 dual camera set up at the back. Similarly, the front camera of mobile will be of a 16MP f/2.0 camera with the usual AI tricks built in. The camera specification seems to be beautiful and appealing. If the camera feature matches with the rumors then Oppo A7 will make a huge market, it can be the choice of many photo enthusiast.

The remaining features are ordinary and unsurprising. The other element includes 802.11ac Wifi, Bluetooth 4.2, and G-Sensor, OTG support or the E-Compass sensor.

The mobile might be available in two different colors such as Glaze Blue and Glaring Gold which is a factor that can attract the buyers.

China-based mobile company Oppo is one of the leading mobile company in Nepal in the present scene. Though many mobile brands are vying in the market, Oppo is showing its excellent performance and making the right place in the market. Oppo’s customers are happy and satisfied with its service. Since its inception, Oppo has been gaining immense success throughout the world. On 2014 Oppo bagged the title of top smartphone brand and was ranked no.4 worldwide.

Key Specifications of Oppo A7: