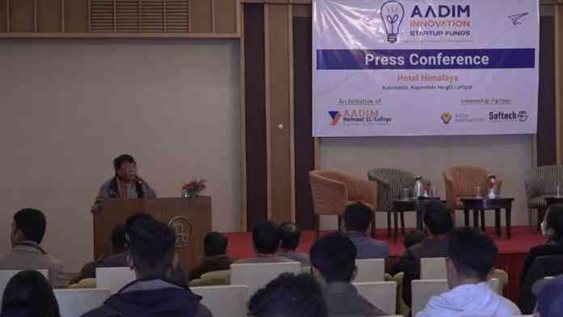 Aadim College affiliated with Tribhuvan University has established the ‘Aadim Innovation Startup Fund.’ The start-up fund was announced in the special presence of Mahabir Pun, head of the National Innovation Center, at the Himalaya Hotel on Sunday.

The College has set up an Aadim Innovation Startup Fund of Rs 1 million targeting Bachelor of Computer Applications (BCA) final year students. Giving information on the Fund at the press conference, Shankar Prasad Sharma College Principal said that the Entrepreneurship Fund was launched by creating opportunities and opportunities for students across the country.

Speaking on the occasion, Mahabir Pun said that it was the first time that a culture of innovation and entrepreneurship had developed in Nepal’s colleges. Pun said, “Even if it starts at Rs 1 million, it will encourage hundreds of others to be active in this field.”

Similarly, the chief guest of the program was Prof. Dr. Shuvarna Shakya, who expressed confidence that students would work on ideas and innovation so that the ‘Aadim Innovation Startup Fund’ would be a new dimension to promoting entrepreneurship in the education sector in Nepal. This fund will be provided, in whole or in part, to the outstanding innovative product or project of the student.

According to the college, the fund was set up to encourage entrepreneurship skills among students and to build a way of thinking that provides jobs rather than searching for employment. This fund, along with studies, will go a long way towards developing entrepreneurship. Nawaraj Poudel, IT Program Director at Tribhuvan University, said that the ‘Aadim Innovation Startup Fund’ was an outstanding initiative in the field of education in Nepal.

The Fund will contribute to the realization of new ideas and principles. The fund may also be used for product branding and marketing purposes. The fund is believed to encourage students to embark on an entrepreneurial journey, said Chief Sharma.

The panel discussion led by Mukesh Singh, Senior Engineering Manager, focused on research and innovation in collaboration with the collaboration of IT colleges.

Aadim College teaches BCA, BBS, BSW in Bachelor and Science and Management in Plus Two. The college, located in Chabahil, Kathmandu, has been imparting emphasis on practical knowledge along with course study to the students and has been including projects since the first semester.