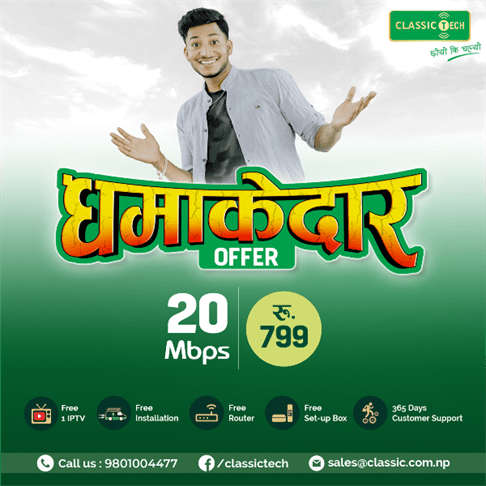 Police arrested a former employee of Classic Tech Pvt. Ltd., one of Nepal’s leading and largest Internet service providers, for breaking down the main devices used for internet services brought from India.

Services were disrupted by more than 50 branches of banks and financial institutions on Wednesday, when Kiran Timalsina, a former Nijgadh employee in Bara, pulled the wires from a data center at the Nepal Electricity Authority (NEA) in Pathalaiya, which links Classic Tech to the main internet.

You may like this: ClassicTech’s 100th Outlet in Kalanki, aims to make Customer Support easier

An official at the head office of Classic Tech informed that the service had been restored by the repair of the optical fiber cut.

Timalsina, a former employee who had left the company, had brought down the national backbone of Classic Tech. As a result, the entire connection between Airtel and Sifi, which had been imported from India via Birgunj, had been broken.

This has primarily impacted the networks of banks and financial institutions, as well as the internet of government departments and the services of other customers.

You may like this: ClassicTech’s 40 Mbps Internet at Rs. 1458 With Free Setup Box

The company states that even the classic tech had lost a lot when the internet service, which was supposed to provide continuous service to customers, was abruptly shut down and the service was shut down at peak times.

According to the company, Timalsina, a former employee, infiltrated the Nepal Electricity Authority (NEA) office via his old identification card and damaged the company’s equipment.

You may like this: We are Reducing the Price of the Internet soon said Minister

Employees are currently in police custody at the Police Headquarters in Simara, Bara.

The law prohibits the disruption of an Internet service, which is an important service. In this situation, the police would be required to take steps in compliance with the Emergency Services Act.

Know the Opportunities for Banking Sector in Nepal