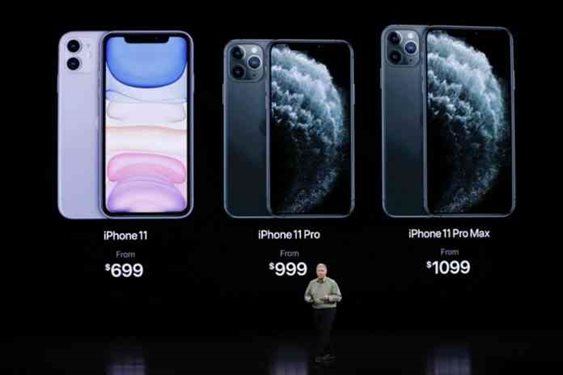 The company claims that the new iPhone is made using iOS 13 and A13 Bionic, is faster and faster than previous phones. Apple has put a particular emphasis on cameras and batteries. The iPhone 11 Pro Max’s battery life is estimated to last about 4 hours longer than the previous XS Max battery. FEATURES OF iPhone 11: The iPhone 11 does not look much different than the iPhone XR, but Apple says it’s made from the most robust glass ever in a smartphone and offers improved water resistance ( IP68), boosting overall durability.

The iPhone 11 has dual cameras while the iPhone 11 Pro and Max Pro have three cameras. It has a full camera, ultra-wide camera and telephoto lens According to Apple, the ultra-wide-angle camera captures four times more scene, making it ideal for landscape photos, architecture images, tight shots, and more. Both of the cameras work together to enable Portrait mode for people, pets, objects, and more, an upgrade over the iPhone XR that only supported person shots in Portrait mode.

The new iPhone has the same emphasis on video and photo editing. In addition to zooming in on video or photos, audio can also be zoomed in while playing video in the new Pro. This will help with a different sound. Similarly, the new iPhone uses the Super Retina XDR display. Apple has added a new Night Mode that’s designed to handle the iPhone’s processing capabilities and the original full camera sensor to capture crisp, clear, bright photos even in shallow lighting conditions, similar to the Night Sight mode on Google Pixel devices. 4K video recording with extended dynamic range is available at 24, 30, or 60fps, and both of the cameras in the iPhone 11 can be used for recording video, with live swapping possible using a simple tap.

Xiaomi Mi band 7 Set To Launch On May 24

Vivo Y72T Price in Nepal With Specifications and Availability

Vivo Y75 Price in Nepal With Specifications and Availability

The ‘BUY’ Button in iTunes May Cause Legal Trouble for Apple