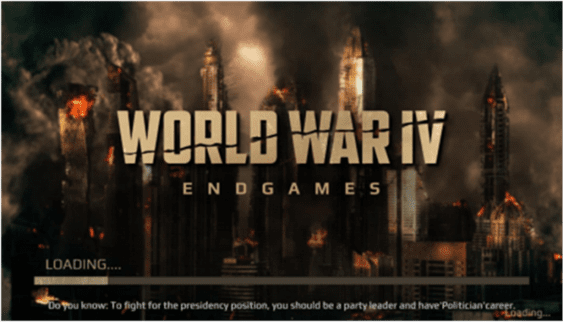 Asterisk Technology, LLC, a newly emerging game development company, has announced an Early Access date for a dystopian text-based online multiplayer role-playing game, World War 4 – Endgames, developed by Podamibe Nepal Pvt Ltd, a Nepal based IT company, which will be launched in Android platform via Google Play Store on April 4, 2021.

The game is set in the year 2030, where World War 3 has already ended, causing devastating effects to mankind, wherein humanity is on the brink of extinction. With New World Order in place, now only eight powerhouse countries remain – the USA, UK, United Europe, United Middle East, China, India, Japan, and Russia – still fighting for a single unified government.

Individual players role-play as one of the survivors of WW3, wherein they can work once every 4 hours, train once every 2 hours, choose among various careers of businessmen/army/worker/politician, produce different raw materials / processed goods / finished goods, export/import goods for profits, invest in the stock market, gather strengths and equip weapons, and ultimately fight for their country for total world domination.

Players can choose different careers, once every 7 days, wherein each career has its own perks. As the remaining eight superpower countries battle with each other over controlling regions depleting the last of resources, players realize the Doomsday ticker is slowly running out, and as the game progress towards the Doomsday, players will have no option but to teaming up together, all fighting for the ultimate survival as the Earth is attacked by “unknown species”, triggering the beginning of the Endgame for humanity.