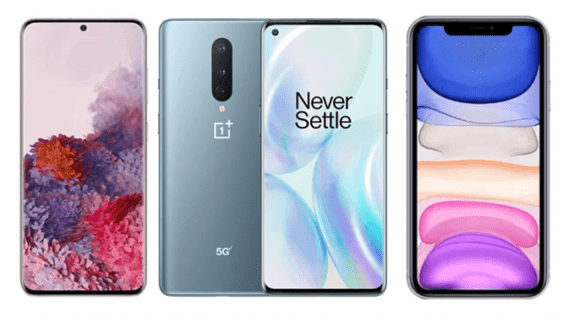 The launch of the new OnePlus 8 has made us think, is it possible to get flagship level spec at such a low price?

So, to know about it, we have evaluated its specs with other Samsung and iPhone flagships with somewhat similar price tags.

The comparison has been made looking at different factors:

Depending on where you live and what storage variant, the product prices differ.

Design and Display These all are relatively premium phones, so their build is to be expected: glass fronts and backs with an aluminum frame. OnePlus eight and Samsung S20 have curved displays on either side of the phone. The iPhone 11 is one without a curved screen, but in general, the phones aren’t wildly different in terms of design.

None of the three phones has a 3.5mm headphone port, and while the iPhone 11 has a Lightning connector, the OnePlus and Samsung devices have the standard USB-C port.

iPhone 11 is the smallest display among all with a 6.1″ Liquid Retina HD display. The Samsung Galaxy S20 has a slightly larger 6.2″ Dynamic AMOLED display with a much higher 1440 x 3200 resolution.

If you like high refresh rates, the Samsung Galaxy S20 is the best choice as it has a 120Hz refresh rate, compared to 90Hz and 60Hx, one OnePlus 8 and iPhone 11, respectively.

You can find a relatively sizeable noticeable notch housing the front camera on the iPhone 11. In the case of the OnePlus eight and Samsung Galaxy S20, they have small punch-hole cut-outs to house the selfie cameras.

Overall, if you care about screen quality, the Samsung Galaxy S20 is the best option with high-resolution quality. But if you want a bigger screen with a sufficient refresh rate, OnePlus 8 is not a bad option either.

The OnePlus 8 has three rear cameras, 48MP as a primary, 16MP ultra-wide, and 2MP macro snapper. The front selfie camera is 16MP.

With the same number of rare cameras, Samsung Galaxy S20 has 12MP main, 64MP telephoto, and 12MP ultra-wide camera. The front selfie camera is 10MP. The 3x hybrid optical zoom is considered as the most accurate camera quality of the Samsung S20.

The iPhone 11 has a 12MP main and 12MP ultra-wide camera on the back and 12MP front camera.

All of the devices capture perfect portrait photos. But in the case of color accuracy, OnePlus eight lags.  Samsung and Apple are known for their exceptional natural-looking image-processing AI.

These two devices are better in their ways.

For shooting video, the 8K video recording quality on Samsung S20 is the best. But the video stability is more impressive on the iPhone than any other.

Performance and OS: Both OnePlus 8 and Samsung Galaxy S20 run Android 10 with their custom user interfaces (UIs). iPhone 11 comes with its latest iOS 13, which is fast and more secure. The iPhone 11 has an A13 Bionic chipset, which is known as the quickest phone chip used in smartphones. But Snapdragon 865 used in the Samsung and OnePlus phones are as fast as the iPhone.

Connectivity: Apple’s iPhone 11 isn’t a 5G phone, which is one of the disadvantages as both the OnePlus eight and Samsung Galaxy S20 having 5G can be purchased. So if you want the next generation of connectivity, getting an iPhone 11 would be a bad idea.

Battery: In terms of battery capacity, the OnePlus 8 has a massive 4,300mAh battery. More significant than the Samsung Galaxy S20’s 4,000mAh and iPhone 11’s 3,110mAh. With the fast charging capability, OnePlus can be the best to choose from for continuous phone dwellers.

Looking at all the specs and quality, it is upon you to decide which one is worth buying. Where, in comparison, Samsung Galaxy S20 is arguably the best phone looking at its impressive display quality, camera, and a decent battery. However, its price range is much higher than any other in the option.

If security is your major concern and you want a perfect performance from your device, iPhone 11 is an excellent choice to make.

Choosing the OnePlus eight can be a great option; you can get a large battery and larger screen. But in this case, you might have to compromise some features like wireless charging and a high-quality display.

As mentioned earlier, all these phones are better in their way. It is upon you to decide which features you will want most in your device and choose it accordingly.