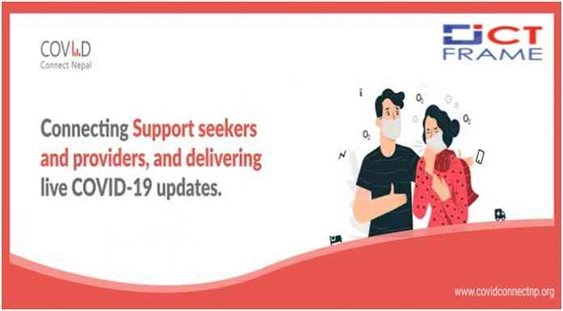 The second wave of coronavirus was wreaking havoc on India’s health. In Nepal, which has close ties with India, it seemed certain that the wave would spread sooner or later.

The government was not doing enough to prepare for it and take precautionary measures. But some young people were already looking for different ways to deal with the epidemic.

On 11 April, Prime Minister KP Sharma was inaugurating the tower with Oli Tamjam. Eight friends, including Samay Khadka, Suraj Pandey, and Ida Rijal, were eager to do something. On the same day, these young people began to build a mechanism to reduce the effects of covid and provide the necessary assistance to the infected. Due to continuous hard work, a platform called KovidConnect came live on 16th April.

Gradually, others joined the youth volunteer movement. At present, 215 volunteer youths from 18 different districts are involved in it. This group of young people between the ages of 18 and 27 is Nepal’s largest volunteer group to provide online services.

They are working day and night to provide essential beds, including hospital beds, oxygen, and plasma, for the infected. Along with the website CovidConnectNP.org, the group has been providing support through Facebook, Instagram, Viber, and Twitter.

Supportive individuals, organizations, and bodies can provide the assistance they can provide in the event of an epidemic through Covid Connect. There is a shortage of beds for hospitalization as the number of infected people is very high. There is a shortage of oxygen. It is even difficult to get an ambulance to the hospital due to the ban. Based on requests made on social media and websites, CovidConnect Nepal’s volunteer team is eager to raise funds. Group members are active 24 hours a day.

Two days ago, at 1 a.m., a request came for Covid Connect for ICU bed. The team members searched various hospitals in the valley.”I was finally admitted to the ICU at 5 in the morning,” says Khadka.

For convenience, various tasks have been divided among the volunteer teams. A team of 50/60 doctors will follow up on the request, analyze and ensure the necessary health assistance.

Also, hospital and ICU beds are vacated according to where they are sent. There is a separate data team. Who understands the condition of the beds in different hospitals and updates them regularly in the system.

Similarly, the technical team looks after the website and Facebook and does the design work. Team members also respond to messages on social media and calls to hotline numbers. Even volunteers from 18 districts can request help from all over Nepal at CovidConnect. For convenience, the Nepali language option is given on the website. So that even those who do not understand English can easily contact and get the necessary help.

However, Prime Minister KP Sharma Oli had claimed a few days ago that there was no shortage of beds for patients in hospitals. The Ministry of Health has published a long list of how many beds are vacant.

It also made headlines in many media outlets. However, the volunteers of CovidConnect Nepal, which is active for the day and night updates, say that the details were fake. We are constantly trying to update how many beds are vacant in which hospital and where the oxygen is, ‘Khadka added. If a hospital provides us with oxygen, we will admit 25/30 patients. Whether or not such beds are vacant does not make sense in the current crisis. ‘

He said that real-time information of bed, ICU, oxygen, etc., can be given if the government wants.

“At the moment, some hospitals are hiding beds when they get updates by phone,” said Samay. “If the government had forced hospitals to update their details regularly, they would not have died without being admitted to the hospital.”

Suraj Pandey, a team member, said that more than 6,000 requests had been received from various media since CovidConnect came into operation.

“We were able to arrange only 812 beds out of the request for 1360 beds,” he said. “We managed to provide oxygen to 229 people and transport to 39 people,” he said. “But the government’s recent decision has made it difficult for us to get oxygen.”

Due to the new decision of the government, the recommendation of the Chief District Officer or the Ministry of Health has to be taken for oxygen. From the beginning, volunteers have been working for Covidconnect at their own expense.

Khadka said that some organizations had shown interest in assisting recently. “We plan to provide free oxygen, ambulance and food to the patients from the aid money,” he said.