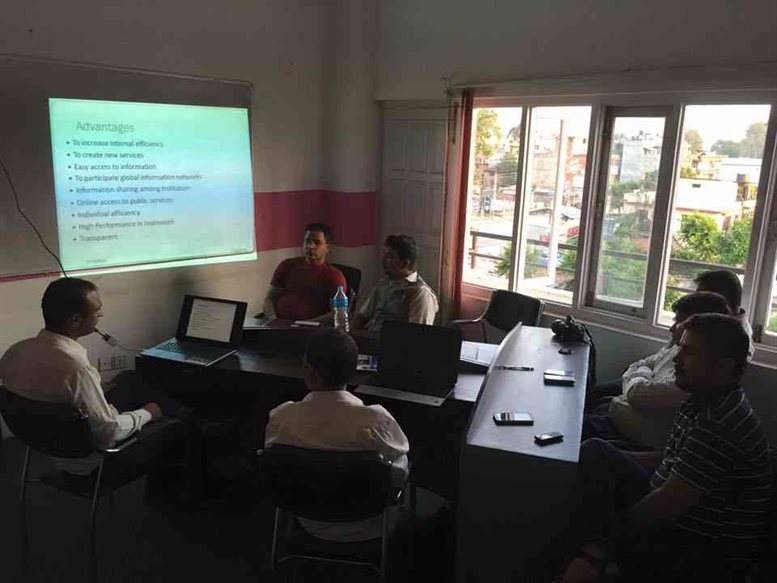 Dr. Ram Hari Subedi, Ph.D. in cybersecurity welcomed all the participants. The meeting commenced with the introduction of each person involved.

Dr. Subedi provided an overview of the “Cyber Security Awareness Campaign.” He informed the participants about the morality in which the campaign is to be conducted. During this briefing session, he outlined the situation of cyber-security in Nepal as well as on the global scale.

He focused on making the campaign as effective as possible. With the mobilization of every stakeholder like government bodies, education institution and also with the support Non-Resident Nepali (NRN) the drive can be held on a full scale covering maximum audience. He also pointed out the need for a small team of IT experts and professionals, who can smoothly convey the actual knowledge of the campaign to the audience.

Dr. Subedi, deliver a brief presentation on Cyber Security in the context of the world providing facts and figures, findings and real example. He gave a short description of today’s E-Generation and the impacts the Internet has made on the daily lifestyle of the people. As being a former employee of the National Aeronautics and Space Administration (NASA), he shared his valuable experience about the way cybersecurity proceedings are carried out in the USA.

Mr. Shankar Pd. Sharma, Head CSIT in Texas International College gave a presentation on the modality of running the campaign.

In the USA, the month of October is celebrated as National Cyber Security Awareness month. Mr. Sharma proposed a similar initiative to be started in Nepal as well. He offered to operate the campaign by dividing it into three specific parts: Friends of the Campaign, the Cyber Awareness Coalition, and Cyber Citizen Forum.

He urged the need to involve every individual or institution associated with cybersecurity in the campaign. Nepal Police, government agencies, education institutions, etc. are some of them. Similarly, he highlighted the need to form a coalition of a strong team to tackle the threats in the cyberspace in the context of Nepal.  Mr. Sharma also outlined the need for comprehensive research on cybersecurity in Nepal, which can prove helpful to any party desiring to study on the topic or start any new initiative.

Mr. Chiranjibi Adhikari, Operations Manager at Nepal Certifying Company, gave a brief presentation on E-Governance pointing out its position in Nepal and highlighting its advantages and disadvantages and also showcased some of its shortcomings in the context of Nepal.