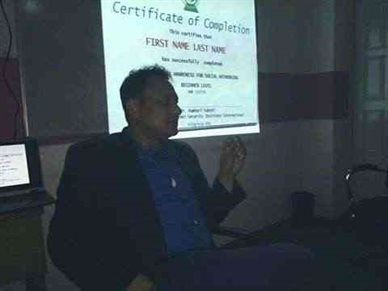 Dr. Ramhari Subedi in Cyber Security chaired the meeting. All the members of the CSI Nepal were present during the meeting. Mr. Nirmal Sharma, renowned actor of Nepal also participated in the conference. Mr. Laxman Bhattarai began the meet with his presentation on Web Security, Web Sense and Data Backup. The information he provided during his performance was very useful in making users aware of the real importance of web security and data backup.

Er. Kumar Pudasaini then delivered his presentation on Prospects and Challenges of Information Security in BFIs. He presented various facts and figures about the importance of data security. He highlighted the need to make data security a major priority, stating that ignorance in this matter can lead to severe consequences.

Er. Pudasaini said, “Information security must be treated as a process, not a product, it must be taken as something that is to be done by ourselves not something to be bought.” Then Mr. Nirmal Sharma, a familiar face from the film industry shared his experience of being part of the team to raise awareness about cybersecurity.

Mr. Sharma said, “It is a pleasure to be part of such an effort and getting to know new aspect about cyberspace.” He expressed his willingness to contribute to the campaign any possible way and assured to help spread the drive to the general public. SSP SarbendraKhanal from Nepal Police also joined the meeting later on. He shared his experience of dealing with real cases of cybercrime.

He said, “In Nepal cybercrime has become a huge problem and the majority of those problem has occurred due to lack of awareness among the users. So, as our resources to deal with cybercrime are limited and the only way we can deal with this issue, for the time being, is through spreading awareness.”

Dr. Ramahari Subedi proposed a collaboration with Nepal Police to make this campaign spread nationwide to which SSP Khanal responded positively saying Nepal Police is ready to provide all kinds of assistance possible through its resources to this campaign. This program was sponsored by Prem Bhandari and Anil Pandey from the USA