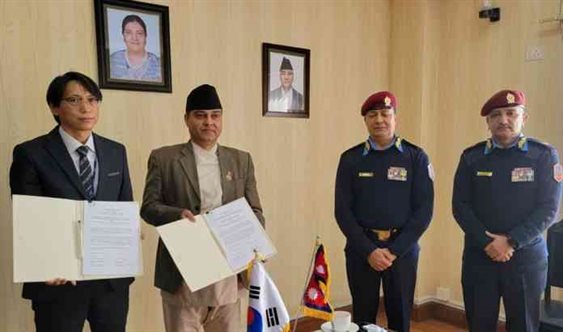 RoD inauguration ceremony for the initiative “Establishment of Cyber Bureau with Capacity Building for Nepal Police.”

The project would invest $800 million over six years to create sophisticated buildings in a cyber-security country and give cyber-crime investigation and digital-related equipment to Nepal Police’s legal research department and related workforce.

Minister Pandey of the Ministry of Home Affairs has pledged his cooperation in successfully implementing this project, which is critical in preventing the growing cybercrime trend.

On December 1, 2021, the Ministry of Home Affairs (MoHA) signed the Record of Discussion (RoD) for the project “Establishment of Cyber Bureau with Capacity Building for Nepal Police” on behalf of the Nepalese government and the Korea International Cooperation Agency (KOICA) on behalf of the Republic of Korea’s government.

The Korean government, through KOICA, will invest USD 8 million over six years in this project. KOICA will carry out the project in close collaboration and coordination with the Ministry of Home Affairs and the Nepal Police Force.

The project’s ultimate purpose is to improve Nepal Police’s anti-cybercrime capabilities, with the major components being the construction of a state-of-the-art Cyber Bureau building, provision of cyber-crime investigation and digital forensic lab equipment, and the development of Nepal Police’s necessary human resources.

Mr. Pandey, Secretary of the Ministry of Home Affairs, emphasized the need for a well-equipped and well-capable Cyber Bureau in combating the growing trend of cyber-crime. He also stated that he would completely participate in completing this initiative.

Mr. Ko, the Country Director of KOICA, defined the project as a cooperative, collaborative effort between the Governments of the Republic of Korea and Nepal.

He noted that this project is extremely important to the Korean government because it will help Nepal prevent cybercrime and safeguard victims by providing expertise and resources based on Korean Police Cyber Bureau experience.

He stated that KOICA and Nepal Police would work tirelessly to ensure the project’s success.

Rs 7.13 Billion Budget Allocated for the ICT Sector in the...