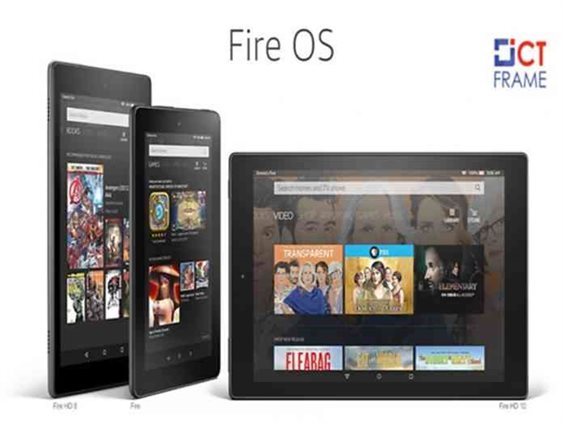 Fire tablets, Echo smart speakers, and Fire TV devices use FireOS created by Amazon. It is a mobile operating system based on Android, except it uses Amazon services instead of Google. In general, it doesn’t contain the Google Play store.  You can only access Amazon apps.  For instance, there will be Silk browser instead of chrome.

Some advantages of FireOS:

Whereas Google created the Android mobile operating system. Touchscreen devices like Smartphones and tablets use Android mostly. Users were able to tap, pinch and swipe effortlessly. It’s easy to use and understand. Moreover, Android provides a rich application framework.  It allows us to build innovative apps and games for mobile devices.

Some advantages of Android:

Kindle Fire tablet used FireOS in 2012. Apple’s iPad mini was on the market at that time. Fire TV, the Echo Show, and Fire tablets also contain this new OS. But Amazon used a color scheme matching its brand. In addition, Amazon wanted to keep its user interface unique. As a result, orange abound appears when you access the settings app or browse the apps installed on your Fire tablet.

Google app store isn’t used. Instead, Amazon App Store is used. Amazon might be able to access limited Google Apps. It features a wide variety of apps. Amazon’s own website can access it. However, you can easily purchase the app you like. It directly gets downloaded to your Amazon Fire device. Amazon apps are much easier to manage.

Some users who are using both OS may find similarities in them. You can also use third-party apps on Amazon. In addition, users can enable features such as mouse support and even the ability to run games and movies that aren’t present on Amazon’s store.

Why Amazon Created Fire OS Instead of Using Google’s Android

Although Amazon could have easily used Google’s Android, they wanted to control the entire experience. So Amazon requires you to use its resources and apps. It’s the whole point of the Fire tablet anyway. It provides an inexpensive window into Amazon services.

The biggest difference using FireOS is the presence of Amazon’s Appstore instead of Google Play. Of course, not every developer does it, but Android app developers can choose whether to list their applications in the Amazon app store as well as Google play.

In fact, people think of Android as a Google Play service because the apps present in Android are written by Google Play Service to access users’ location, payments, and other services.

In general, you still have access to a few Android apps. In addition, users can search the Amazon Appstore on the web to see if the apps they use are available.

Amazon Appstore is also available for download. That means you can install the Amazon Appstore on Android devices. In addition, Android users can easily download apps from there.

You can change the Fire tablet more like stock Android. For that, you need to install the Google play service. Also, use a more traditional launcher, and turn off several Amazon-specific features.

Google or Amazon does not officially support it. Yet, it is possible without rooting your device. It will help if you put in extra effort to make it happen. In addition, it’s possible Amazon may crack down on this in future versions of Fire OS.