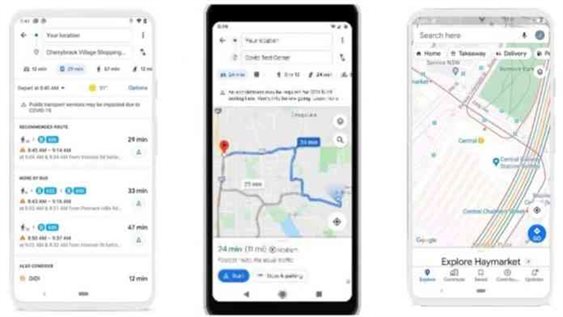 Recently, google has added several new features into its apps. Tech Hindustan claims the company has added 250 new features in app google map alone which comprised of minor changes in the logo of the app along with several updates for user friendly interfaces via updates.

Google has introduced new features and enhancements to its apps after the corona pandemic since the late 2019. Intended with assisting the travel fanatics and those who are planning to visit some places during this period, additional information and features on corona has been included in google map. With the updates, the app will now be able to show the status of corona in the area with authentic sources provided by local and concerned bodies of the areas.

With these added features, any user can learn about the number of corona cases in any particular area and also google map would convey the information on how swarming the local traffic is around them. The users can also learn about the congestion in railway, subway or local bus using the app without having to reach the place by the use of Google map.

Reports have stated that these features are included on Google Maps of every iOS and Android around the globe. With the inclusion of the features, the users of Google Maps in Canada, Germany, America, Australia, India and Brazil can now enjoy the actual status of their order and takeout.

Similarly, the feature will provide the details on time of delivery and its costs for those users. However, the facility shall be enjoyed by the users who order or book goods using Google Maps using iOS and Android.