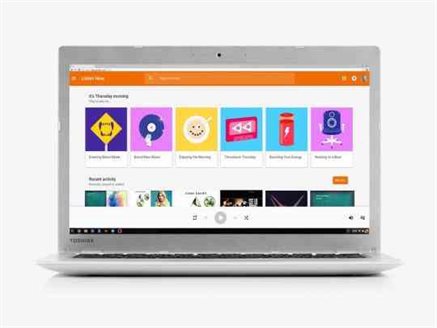 With Apple having their music streaming website which people can have access to with a subscription has brought the music streaming systems like Spotify and Pandora to some challenging days. However being a free system for the music, there is still a chance that Apple might take over their place.

Apple did face some negative issue with the whole music streaming site as artist denied to be a part of it. But soon enough apple had resolve some things about the issue. However what we see here is quite different. Google play music has made its service to be available without a subscription. How cool is that? With Apple recently launching its subscription-based website and Google making its music service free will be bringing a lot of competition in the music streaming business. However, with the free service there comes a catch that is you will have to listen to the ads

Just like Spotify and Pandora, Google Play Music lets people stream preset compilations that Google thinks you would want to listen to during certain activities. It, not a big surprise that Google came with such an offer as streaming media have been struggling to find enough people willing to pay monthly subscriptions as people instead would choose the free service and listen to the music freely even if they are with ads.

Their only way of survival is by the number of ads they do as there are not many subscribers that are paying. For example, Spotify recently started letting people listen to music ad-free for 30 minutes in exchange for showing them a video ad. Videos ads, however, make more money this day rather than the audio ads. That’s why they have been working for this.

This way both can be befitted. Only about 30% of Spotify’s user base pay for the monthly service. Google will roll out the updates for the ios and android version this week, and it has already updated the desktop version this Tuesday. Apple to have given an excellent service of streaming music for $9.99 a month.  Now that tech giants like Apple and Google are in business with the streaming media; it’s going to be a fierce competition for other companies to stand out in the game. However with better services they might even have a chance to be the ultimate.

A New Ridesharing Service Emerges From The Lockdown!